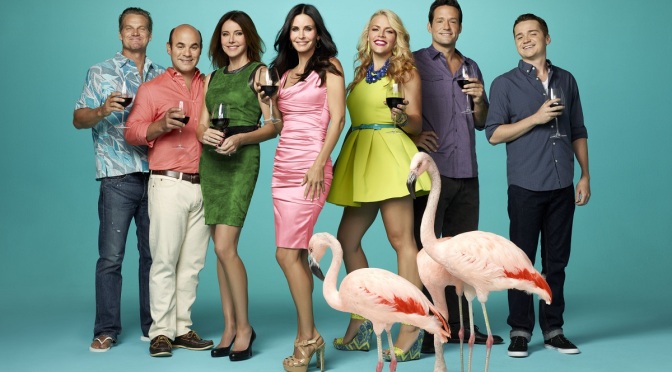 It’s the show that Channel 7 boss David Leckie once famously claimed was a ‘shit show‘ and was shamefully given a post 10pm time-slot two weeks after it’s prime time premiere, but comedy Cougar Town is back on 7 with a brand new season.

Cougar Town has evolved effectively over the previous three seasons distancing itself from the original premise of a 40+ yr old woman on the hunt for a younger man after the break up of her marriage, into a funny, witty and grossly entertaining comedy focusing more on relationships between friends and family…..oh and wine.

The shows title has become such a stigma that between seasons two and three, show creator Bill Lawrence (the genius behind Scrubs and Spin City) hit twitter to ask permission of co-creator Kevin Biegel to change the name. Now in it’s fourth season here (Season 5 starts next year in the states), the title remains the same but now comes with the added fun of piss-taking itself in the opening credits with a different statement created on a weekly basis.

So what can we expect from season four? The show was picked up by TBS in the states after ABC decided not to renew the show after its third season and creator Lawrence took a step back from the show but this has done nothing to ruin the flow of each episode.

We’ll see more stories involving the newlywed Jules (Courteney Cox) and Grayson (Josh Hopkins) and should-they-shouldn’t-they relationship between Jules Cobb’s son Travis (Dan Byrd) and best friend Laurie Keller (Busy Phillipps). There will be a death of a loved one, a gold digger and Jules’ father pops back in for a visit. This season also features an incredibly funny flashback episode that treats us to the backstory of Jules and Bobby moving into the cul-de-sac.

2 thoughts on “Cougar Town Back on 7 for Fourth Season”