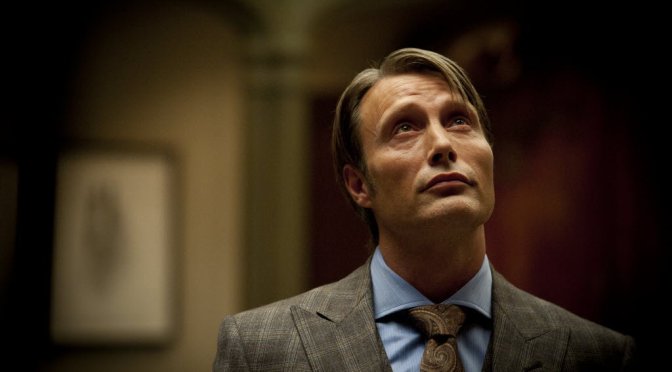 Says Fuller: “When I was breaking the pilot and thinking about where this goes, it occurred to me that Hannibal needs to win this round…I had always pitched in every conversation that … the last shot of the season is that iconic shot from Silence of the Lambs where you’re coming down the corridor toward the last cell on the left and instead of finding Hannibal Lecter there, you find Will Graham. It felt very poetic and it felt powerful and it felt full of promise.”

With season one now done, fans (myself included) are left to wonder what the fate is for our beloved Will Graham (Hugh Dancy) and who’s next on the menu for Hannibal (Mads Mikkelsen).

In an interview with TV Guide, Fuller was quick to re-instate his plan for the series stating that Hannibal will consist of several season long story arcs that will bring the series to it’s most logical conclusion – the beginning of The Silence of the Lambs.

Season two will be set up to explore the ramifications of those involved in season one considering most were dealt heavy blows by Will’s supposed involvement in the copycat murders.

Says Fuller, “[Will] will be incarcerated, and we will be dealing with all of the threads of that…Will Graham needs to go on trial for the murders that he may or may not have committed. Jack has to be brought before a review board for his participation in what happened to Will, and Hannibal, as Will’s psychiatrist, is going to continue to try to help Will see the truth that Hannibal wants him to see. The ball is up in the air in so many ways for Jack and Hannibal and Will. The fun of season 2 will be spiking those balls.”

Fuller also states that season two will also incorporate Will’s realization that Hannibal was in fact responsible for the copycat murders to which Fuller feels like Will would have mentioned something to Jack Crawford (Laurence Fishbourne) prior to being tossed in a cell. In addition to facing a review board as fallout for the Will Graham fiasco, it seems that investigating Will’s claims will clearly be a part of Jack’s season 2 arc.

“…Jack will be investigating those accusations. I think after Will woke up from getting shot by Jack and before he was put into the institution, he shared his theories about Hannibal. Now it’s up to those characters and Hannibal Lecter to either support or deny those accusations in a properly investigated way.”

Fuller is still yet to part with any details on supporting cast including Gillian Anderson as Hannibal’s psychotherapist.  “I don’t think anyone knows what’s going to happen in the series. However, I will continue to be on it, until he eats me,” Anderson says.

Hannibal will return for Season two in 2014.

One thought on “Hannibal Season 2 Details”