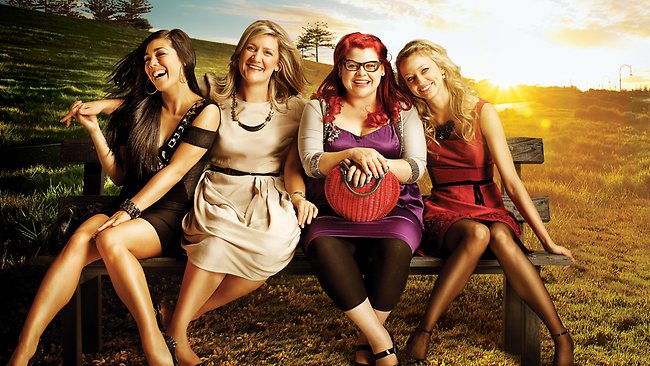 I’m just going to put it out there….I really don’t (and never really have) watch many Australian made tv shows.  Blue Heelers?  I remember a whole lot of fuss and bother over Maggie Doyle and that guy Martin Sacks played.  Offspring?  I think I’m the only one who didn’t know who Patrick was and why the country stopped to honor his death.  I did give Packed to the Rafters a shot, but that was only because I was in love with Rebecca Gibney.  Don’t get me wrong though, I do watch some things we make….

Along with Wentworth, Please Like Me and anything involving Chris Lilley, Winners and Losers sits happily in my ‘really want to watch’ pile.  That age old story of four friends reuniting at their high school reunion only to find out they’ve won 2 million each in the lottery had me hooked from episode one.

Ratings wise, the show is doing well.  After a shaky season three opener (Why?!  Did people not remember the cliffhanger of season two?  MATT. BLOWS. UP.) the ratings have begun to top the 1 million viewer mark and usually wins it’s time-slot.  So that said, why is channel 7 splitting the season in half, stopping after 13 episodes instead of the usual 20+ season run?  Next week will see a double night mid-season finale before the show returns next year.

Winners and Losers script producer Dan Bennett tweeted me informing me that yes, the show will be back and that next week’s mid-season finale will be a life changing cliffhanger.

Though I’m wondering if Channel 7 have forgotten what happened when they did this to Packed to the Rafters during season 5?  Remember?  People invested themselves into 10 episodes of the show before it was pulled off the air until the following year, then, when Channel 7 so graciously brought it back, people stopped watching and ratings dropped considerably.

I’m hoping (and secretly knowing) that Winners and Losers should be strong enough to withstand a         mid-season pause.  The season so far has been strong with the show moving away from “We’re rich!”         story-lines and focusing more on family/relationships and and the addition of new characters has given the show a much needed boost with Matt (Blair McDonough) and Tiffany Turner (Michala Banas) exiting.

Next weeks double hitter begins Tuesday at 8:45pm on Channel 7.