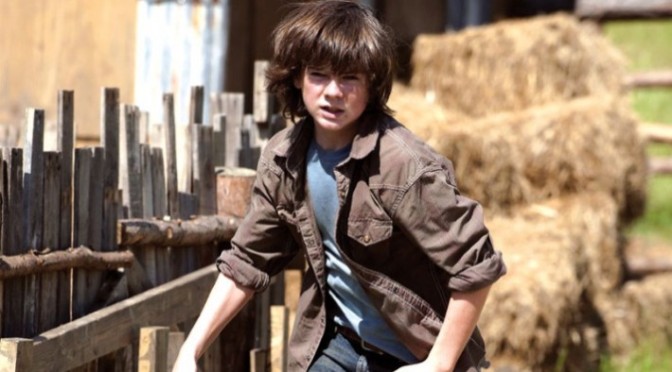 What a way to start off a fresh new season!  It seems some time has passed since we last saw Rick and the gang taking refuge in the prison (I’m not entirely sure just how long) and now, with the addition of new survivors being added to the refuge, the prison has now become sort of a community – just like the one the Governor had run at Woodbury (but with less sadomasochism)

While inside the refuge, we see Maggie cooking breakfast in a makeshift outdoor kitchen (she also runs a kids reading club that secretly acts as a weapons workshop), Darryl has become the refugee’s hero, Hershel and Rick are tending the vegetable garden and Michonne is out on runs (for comic books we’re led to believe but she’s still on the hunt for the missing Governor) outside, the perimeter fences are becoming more infested with walkers with each new day that passes.

Carl is still around (he’s my new Lori) and there’s still major conflict between him and Rick, but we start to see Rick finally take parental actions towards Carl, doing his best to remove him from the violence that he was forced to endure before the end of season three.  Beth is there too.  She seems more at ease with the predicament she’s in.  She’s even met a new fellow called Zach – though as we find out, he becomes zombie chow during a supply sweep at an abandoned shopping mall, but handles the news well about his death…perhaps a new Beth is finally starting to emerge?

The supply run is where most of the action takes place.  Darryl along with Zach, Tyreese, Sasha, Glenn (who stopped Maggie from joining because it turns out, they were in the middle of a pregnancy scare) and newcomer Bob find themselves literally fighting zombies dropping from the sky.  We know someone’s going to die, we’re all expecting it to be Bob – he’s new and seemed too eager to participate, but Darryl to the rescue saves him leaving an unguarded Zach to have a bite taken out of him.

There’s a weird scene between Rick and a stranded survivor named Clara out in the forest.  She’s searching for food for her husband before Rick stumbles across her and asks for help.  She talks about being at an airport in lock-down before the zombies break through and they run for their lives.  Back at her little camp she suddenly attacks Rick…turns out her husband is a walker, she wants to join him and stabs herself in front of Rick.  It took me a bit to realize this scene was about Rick understanding that no matter what the future may hold (cure or no cure) there really is no coming back from the decisions you make and the actions you take during this zombie apocalypse.

Keeping up the pace until the end, we see newcomer Patrick making his way to the showers.  He’s clearly not well.  Coughing the place down and dripping in sweat.  No one seems to take notice.  He collapses on the floor.  When we cut back to him we see where next week will take us – Patrick has turned.  We don’t know what killed him, but now there’s a walker inside the prison.

The Walking Dead 4×02 airs next Monday night on FX on Foxtel.