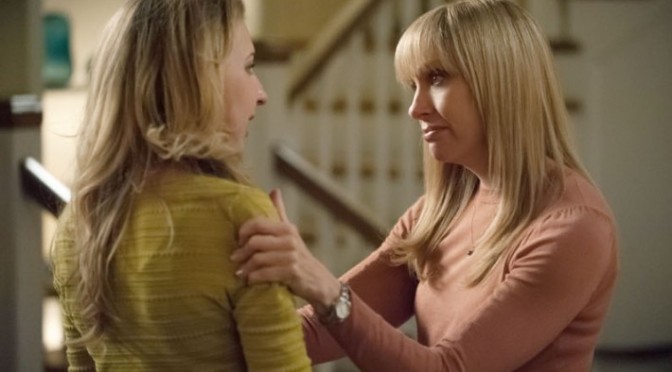 Wednesday night’s up-coming double hitter of Hostages proves why this show is one of the best drama shows currently on television.  Let’s just say that by the end of the second episode (episode 7), you will not believe just how intertwined the lives of Ellen Sanders and her family are with those around her.

The first of the two episodes, titled ‘Sisters Keeper‘ follows on from last weeks episode closer in which we saw the Sanders children brought back home after trying escape.  ‘Sisters Keeper’ see’s the Sanders having to deal with the fallout from their failed escape attempt and Ellen receive an unplanned visit from her sister Lauren (Nina Arianda) and Duncan puts a plan in effect to have Ellen remove her immediately at any cost.

The second episode, titled ‘Hail Mary‘ is where the payoff for viewers really starts to present itself.  We finally learn why Duncan sent Archer to prison – albeit, this feels like a rather late piece of information considering the reveals still to come in this episode.  Ellen will discover just how closely entwined her life and Duncan’s lives really are and someone rather unexpected becomes top spot suspect number one for possibly wanting the president dead!

Both episodes do contain some rather inane story-lines (social worker investigation of possible domestic abuse of Morgan Sanders and the personal lives of Sandrine and Duncan’s brother – his name escapes me now) but the kicker of it all is the closing scene in the second episode.  Just a hint – it involves a needle filled with the poison meant for the president!

When your house is in the final stages of being built and you drive past it every day to make sure it's all still there! @langdonbuilding #NewHome #LangdonBuilding
Lammy the lamb is a little excited to see me this morning! #lamb #BabyLamb #FarmLife #animalsofinstagram
So one day, down on the farm, there was a baby lamb and a pup and they huddled around the bonfire... 😊
I'm here and logged in and ready to be a part of this #MelrosePlace reunion happening LIVE in about 30 mins!
I'm changing my profession to that of "Baby Lamb Photographer" #Lamb #BabyLamb #lambphotography
Baby lamb out and about today!
So that's what I'd look like with green or blue eyes! Boredom made me download tiktok but have no clue what to do with it...
Being in lockdown means I have time to revisit one of my all-time favourite games - @xcomgame 2! Thankfully it was easy for me to find in storage. Hoping a third outing for this series comes soon! #Xcom2 @playstationau #ps4 #playstation #CharacterCustomization #CharacterCreation #Xcom
Hey I'm wearing pants that aren't track pants.
Weeks away! Went to visit the block today and met up with our awesome builder Geoff. Carpet, flooring, tiles, cement and benches to go! Small bits and pieces but she's looking schmick! @langdonbuilding #LangdonBuilding
It's Monday?! I think..... Watched the new #StarWars movie today. Meh. Highlight of the day was eating a choc honeycomb easter rabbit for lunch. How much longer can this go on for?
Got to visit the house late last week! Vanity units installed, kitchen almost done, lights installed, tiling done! Carpet, kitchen tiling and robe cabinetry to come, along with external concreting and the installation of the skylight in the laundry and awaiting the stone bench top for the kitchen which is about two weeks away! Great to see all of our design choices that we picked in June last year! Thankfully the Coronavirus has only pushed us back by about two weeks (fingers crossed) so we could be looking at an early May move date! @langdonbuilding
%d bloggers like this: