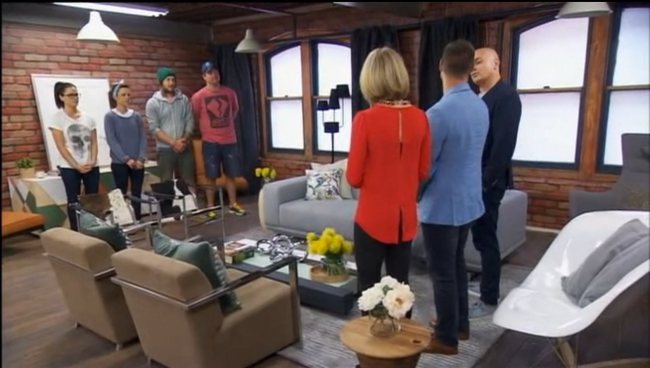 *The most interesting thing to happen in the first 10 minutes – Darren Palmer karate chopping a designer cushion and offering it up as professional styling (after an added side poke).

*I did like Dale’s interpretation of their brick wallpaper (which Clueless fans would automatically call a ‘Monet’) – Great from afar but horrible close-up.

*Thankfully, Chantelle’s very much talked about bright yellow Winnie The Pooh cushion was no where to be seen in the final result – or even mentioned at all. Funnily enough, I did happen to catch Kyal walking away with it when talking with Steve about the placement of a side table.

*Steve’s over-sized hipster beanie is now on par with Dale’s neck tattoo and face hair in terms of my level of hate.

So once again, the twins end up with the least desirable apartment to make over.  Can they make it two for two?  If they keep thinking their roof filled view from the rooftop entertaining area is “like the English countryside” then I’d say no….unless the English Countryside looks like Birmingham.

Well well well.  Didn’t these twins from Victoria just blow everyone out of the water with their instant kitchen, and by everyone, I mean Chloe and Kelly!  Fair to say, I doubt most would have expected much from the two, and they didn’t really get off to the best start.

Trying to find Hapuku (which sounds like a noise a street fighter character would make) left them running late, and it seemed they spent as much time getting ready as they did prepping the entree, but, these girls, scored three 10′s – oh and also managed to wipe any smirks Kelly and Chloe were sporting.  Seriously, someone needs to make a stack of gif’s of Kelly from tonight’s episode.

Best Dish of the Night?  The big hot bowl of ‘kiss my ass’ soup served to Chloe and Kelly.  The girls were ready for the VIC twins to fail and were ready to pounce on any slight mistake there was on the food.  Then they go and score the girls an 8 for their menu.

The Food Overall?  Didn’t seem too complex.  It was no de-boned quail and the entree was basically fish taco’s and Semolina cake sounds like some sort of medieval virus, but apparently tastes amazing.

The Final Result?  Kelly and Chloe scampered away with their tails between their legs.  Helena and Vikki celebrate by nabbing not only top spot on the leader-board but also equaling the highest ever instant restaurant score given on MKR.  So if according to Helena, they (the twins) have half a brain each, and scored three 10′s, I’m left wondering just how much brain Andrew and Emelia are sharing?

Next Up?  We’re off to South Australia where Deb gets her painted knockers out for Manu and hopefully rips out a rendition of ‘The Rose’ while sporting Bette Middler’s nose prosthetic used in Hocus Pocus and whipping up a batch of Deb Instant Mashed Potato.