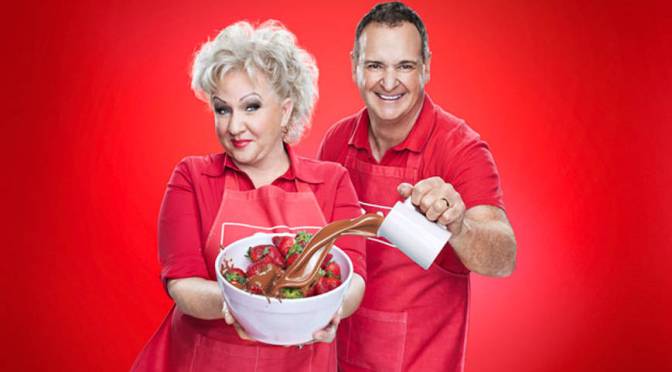 Had things gone to plan for Deb and Rick’s instant kitchen, the married duo from SA would have nabbed perfect 10’s, taken top spot on the leader board and Manu would be hog-tied in the basement.  Well, there were no 10’s, no top spot and as far as I know, Manu is safe and sound speaking French and eating delicious French food while wearing a kicky beret.

In the kitchen, the well hyped Naughty Nana Deb, ended up being a seriously Frazzled Nana in the kitchen.  Too much mustard dressing on the entrée, over thinking the main and under-cooking the first batch of cake for the desert. Good thing super Rick was there to save the day.

Best Dish of the Night: Vikki’s champagne pouring skills.  It’s clear the VIC twin has not been fortunate enough to travel to exotic places like Chloe and Kelly, where champagne flows freely (and is well poured).  The amount of head that ended up in each glass resulted in a terrible froth vs bubbly ratio and i’m pretty sure Vikki had been swigging from the bottle as she must have thought Kelly was an empty glass and proceeded to spill champagne all over her.

The Food Overall: Very home-style, family cooking.  Once again, there was nothing really complicated (though I couldn’t cook trout to save myself) and if you’re going to offer a trifle for desert, naming it after yourself should mean there is something unique about it – say maybe an eyebrow pencil in each glass?

The Final Result: Well Deb offered up a glimpse of her painted naked body to Manu – so she’s on a win for the night. Kelly ended up with a dress soaked in champagne – so we got a win too.  Most scores were pretty mid-range.  Think the two hour wait for Deb’s trifle resulted in some points being taken off.  Our saucy Nana and her savior hubby will safely continue on to the next round.

Next Up: Hopefully the ‘well traveled friends’ Chloe and Kelly are taking everyone to some glorious and fantastic location just so they can share some of the sights and tastes they have experienced in their privileged lives.  Oh, and there’s a cheating scandal too.  Shock horror!

As much as I [bagged] her out in my open letter, I really do feel for Chantelle and husband Steve.  This whole builder situation is even beginning to make me feel uneasy for them.  I could imagine nothing more worse than being two days in and still not have a builder secured for the job.

They had a builder, then they didn’t, then they had two and then they had none…oh and no plans either.  Seems builder number one went bye bye, not only with his chippie and sparky but also with the plans drawn up for the apartment.  Makes me wonder about these builders who first agree to do work with contestants and then back out.  It’s not like it’s some big surprise there’s going to be a crap load of work involved and a camera crew in your face.

But Chantelle and Steve aren’t the only one with tradie issues.  While Kyal and Kara seem pretty set to bang on without a builder (for now) they are in need of a sparky and when one arrives, this is what turns up…

I think Kara’s face said everything that we were all wanting to say.

I’m also noticing a lot more focus on the fan teams over the favorites.  I can’t really remember much about the boys and what they did and the girls…their plans for a floating staircase leading up to a floating office were ruined by Foreman Keith.  Something about lower beams and supports…sometimes all the building talk get’s too complicated for me.

Tuesday night’s episode is all about a shock surprise which puts all the contestants under a lot of stress.  We already know it’s the requirement of having the entire plans drafted within 24 hours.  I do think the editing department of the show really need to sit down and take a proper look at just what they’re showing us in future previews.

When your house is in the final stages of being built and you drive past it every day to make sure it's all still there! @langdonbuilding #NewHome #LangdonBuilding
Lammy the lamb is a little excited to see me this morning! #lamb #BabyLamb #FarmLife #animalsofinstagram
So one day, down on the farm, there was a baby lamb and a pup and they huddled around the bonfire... 😊
I'm here and logged in and ready to be a part of this #MelrosePlace reunion happening LIVE in about 30 mins!
I'm changing my profession to that of "Baby Lamb Photographer" #Lamb #BabyLamb #lambphotography
Baby lamb out and about today!
So that's what I'd look like with green or blue eyes! Boredom made me download tiktok but have no clue what to do with it...
Being in lockdown means I have time to revisit one of my all-time favourite games - @xcomgame 2! Thankfully it was easy for me to find in storage. Hoping a third outing for this series comes soon! #Xcom2 @playstationau #ps4 #playstation #CharacterCustomization #CharacterCreation #Xcom
Hey I'm wearing pants that aren't track pants.
Weeks away! Went to visit the block today and met up with our awesome builder Geoff. Carpet, flooring, tiles, cement and benches to go! Small bits and pieces but she's looking schmick! @langdonbuilding #LangdonBuilding
It's Monday?! I think..... Watched the new #StarWars movie today. Meh. Highlight of the day was eating a choc honeycomb easter rabbit for lunch. How much longer can this go on for?
Got to visit the house late last week! Vanity units installed, kitchen almost done, lights installed, tiling done! Carpet, kitchen tiling and robe cabinetry to come, along with external concreting and the installation of the skylight in the laundry and awaiting the stone bench top for the kitchen which is about two weeks away! Great to see all of our design choices that we picked in June last year! Thankfully the Coronavirus has only pushed us back by about two weeks (fingers crossed) so we could be looking at an early May move date! @langdonbuilding
%d bloggers like this: