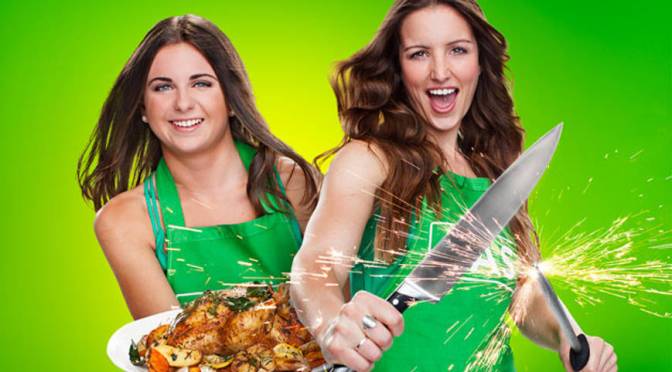 As David would say, “These 12 year olds really can cook”.  Well he didn’t say that, but the 12 year old part he did say….many times and it was rather creepy.  These girls, THalia and Bianca are best friends.  They play and study together and also cook together.

Both are so perky and bubbly and BFF’s, it’s hard to not like them. They have aspirations of opening their own fresh fruit market….I think.  I was distracted by all the rainbows and unicorns and stickers shooting out of their mouths when they spoke.

They cleaned out the fresh fruit department of Coles, squealed a lot and basically hand painted the meringue onto their Bombe Alaskas.

Best Dish Of The Night: When David joined the ‘bitch gang’ and cemented himself as the Regina George of the group (needed a little Mean Girls reference there!).  So utterly disgusted with his current standing on the ladder, David along with Corinne, continued to make snide remarks about the menu and the food being delivered all night long.

The Food Overall: I’d call the theme; Nana’s 70’s Seafood Extravaganza! Nan’s pate’ with brioche and chutney for entree (which made Uel throw in a “That was patasty!” joke), Steamed salmon with crunchy diced potatoes and home made aioli (or fish ‘n’ chips) and Bombe Alaska for sweets. Presentation was decent on all plates, with exception of the Bombe Alaska.

David wanted his to be on fire.

The Final Result:  Their Nan’s entree earned the girls high marks from all.  An average score of 8 (yes, even Regina George gave an 8) plus impressive scores (mostly) from the judges see the BFF’s easily take top spot on the ladder.

Next Up: Harry and Christo from VIC and if judging by how many things Harry drops while in the kitchen, it’s no surprise that he suffered a very serious injury.