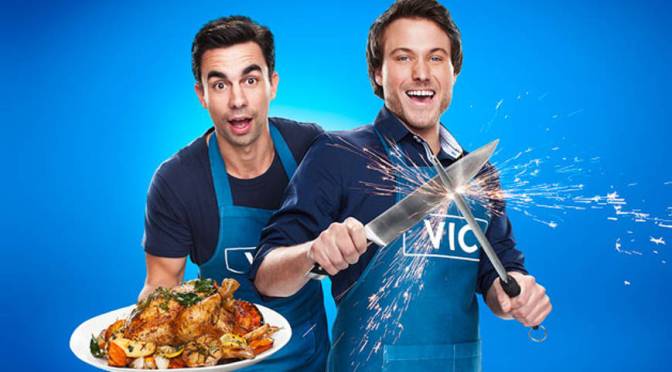 Well well well.  Didn’t the boys from VIC just go balls up in their Instant kitchen last night?  They pretty much ruined the plan to keep David and Corinne in the bottom position on the ladder and now, it looks like, these boys won’t make it to the second round.

From dropped eggs to cut fingers to broken pastry to popping open a can of pastry weights…nothing was going to go right tonight – for Harry.  Christo on the other hand managed to rip out a dozen individual tart bases while Harry was out buying eggs…think this tells Christo that his team should of consisted of one?

David (Regina George) was in fine form.  His constant use of ‘this dish has no technical skills’ again, only reinforced the fact that they screwed up their ‘highly technical seafood menu’.

The Best Dish of The Night: Manu finally loosing his shit about there being NO SAUCE provided with the main.  According to Christo, the plan was for the ‘veal to speak for itself’.  Manu was right when he retorted “The veal can’t speak for itself.  The veal is dead”.

The Food Overall:  Bad.  So the onion tart for entree was the best dish, the fact that it looked like cat food made it the least appealing. The main of Veal and beans was dry and chewy while the dessert of Blueberry everything was semi under-cooked and the ice cream was SAVORY!

The Final Result: BOTTOM OF THE LADDER.  Yep, these two pushed David and Corinne off the bottom of the ladder.  You could almost hear the sighs of despair nation wide when Pete offered up his final 2 point score for the desert leaving the boys in last place.

Up Next: The mums from SA tidy house, put on ball gowns and give the kids to the grandparents for the night.