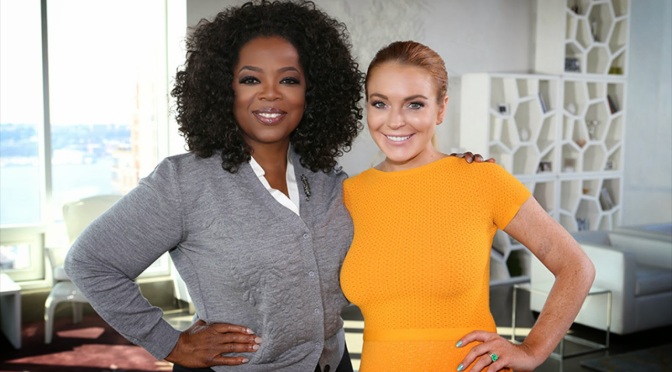 Oprah Winfrey’s OWN network has released a first look at the 9 part documentary series on troubled actress Lindsay Lohan.

The series, premiering Sunday March 9th on OWN, directed by Emmy-nominated filmmaker Amy Rice (By The People: The Election of Barack Obama), will follow movie star and media sensation Lindsay Lohan on her journey through recovery following a very public period of crisis and multiple run-ins with the law.

From the network: “Lindsay is strikingly candid about her situation and is more determined than ever to get back on her feet. In this honest, no-holds-barred account, viewers will see an intimate, unflinching look into the life of one of the world’s most sought-after celebrities.”

“Cameras follow Lindsay as she returns to New York, reunites with friends and family, and attempts to build a new life. As she works to stay on track amid the demands (and pitfalls) of fame, she opens up as never before, discussing everything from her emotional recovery process to her exhausting run-ins with the paparazzi.”

The first look promo takes us into various scenes of Lindsay’s rather crazy life from avoiding the paparazzi to being reunited with her mother Dina Lohan.  There’s a confrontation with her father Michael Lohan and even a view from those filming the series and the issues faced in working with Lindsay herself.

Oprah even gets in on the action, getting face to face with the star and telling her to “cut the bullshit”

Check out the video trailer below courtesy of Clevver TV