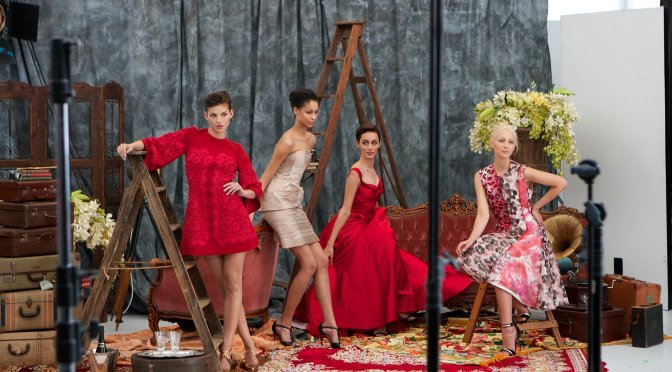 Tuesday night’s episode of The Face Australia (episode two) amped everything up a notch from last week’s premiere bringing with it tears, tantrums, two photo shoots and our first elimination from the competition.

Then to see how much the girls learnt from watching Naomi, they then found themselves posing with necklaces, apples, headphone, cupcakes and other assorted objects in a test shoot that resulted in Naomi demanding to see more energy from the girls with these photos.

Cue Sarah earning the wrath of Naomi as you NEVER EVER TAKE YOUR SHOES OFF for a photoshoot!

There were short model mentor sessions (with added notepads and pencils) and before we knew it, we were at challenge number two for this week.  A group shot for Marie Claire magazine with each teams mentor coaching the girls through the shoot.

Not to sugar coat anything here, but this is the stuff we all come to watch because this is where the magic starts to appear and we get a very crystal clear glimpse into the mentoring styles of each of these models. Nicole Trunfio offers quiet confidence and criticism while the shoot happens, casually guiding her girls to get the right shot.  Cheyenne Tozzi is a little more vocal, but offers an air of respect towards her team.  Naomi Campbell….well…..

There’s tough love and then there’s tough love Naomi Campbell style.  To put things into perspective, she managed to put one of her girls (Brittaney) in tears even before any make-up was applied.  I think Cheyenne nailed it when describing Naomi’s team of models as “Yes Ma’am and No Ma’am” robots and Cheyenne isn’t the only one sensing fear in Naomi’s team.

Good ole’ Jackie Frank, she of Marie Claire magazine, comes along to pick the winning team resulting in a win for team Naomi (I’m so shocked) leaving Cheyenne and Nicole to pick the weakest link in their team to go into elimination.

I’m not the biggest fan of the eliminations and how it’s decided.  As both Cheyenne and Nicole had to put up a girl for elimination, it meant Naomi then gets to choose which girl is eliminated from the competition…based on who makes her believe they want it more.  Yep…to stay in this competition you need to 1 – avoid being the weakest link in a losing team and 2 – have good pleading skills.

The winner of the night: Cheyenne Tozzi’s boobs.  Seriously, LOOK AT THEM.

The perfect dress to even make me ignore the teacup on the head pose.

The Loser of the night: Natalie from Team Cheyenne.  I think had she used a make believe child to “do this for” she might have had a chance in persuading Naomi to keep her in.  Good on Cheyenne though for that awesome confrontation with Naomi about her reasons in kicking Natalie out.

My Scorecard – 3 for 4.  Brittaney, Sarah and Anoushka still in, Tess didn’t even make it past eliminations in episode one.  Brittaney cried, Sarah got Naomi angry and Anoushka steamrolled everyone in her group photo…think my team might be on shaky ground!

Next week: Tears, tantrums and another photo shoot!