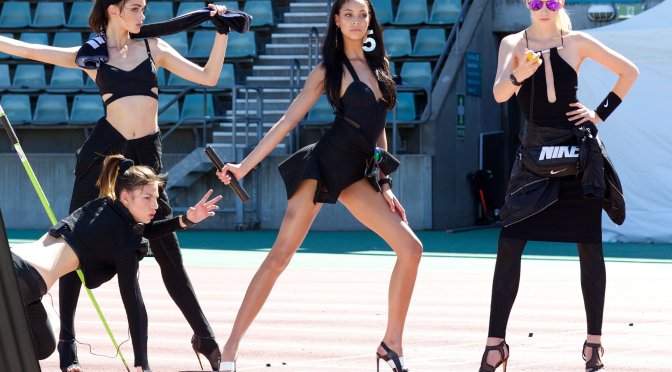 Episode Four….man I yelled at the TV during this one!  This show, or Naomi mainly, is evoking some rather deeply hidden paternal feelings for Nicole Trunfio.  I just want to scoop her up, brush her hair and feed her grapes while telling her “it will all be ok”.

As per the norm, we start off by checking in with each of the teams and see how they are coping with high demands and stress of being on The Face Australia.  Brittaney is determined to rise from the ashes of last weeks dismal effort and while I applaud her new fervour, her team mates however are calling this new vim her way of being a bitch with too much ‘tude.  They still can’t understand why her interaction with them has been on the down-low..you know..ever since they all nominated her to go up for elimination…in front of Naomi Campbell.

Things are brighter over at Team Cheyenne.  They’re still riding high after last weeks win and have noticed a rift between the girls in Team Naomi.  Same applies for Melise and Anoushka, the only surviving members of Team Nicole, who are hoping the girls continue to fall apart.

Nicole Trunfio takes centre to show the girls how it’s done by basically showing up anything any of these girls could ever hope to achieve on the trampoline.  So poised and in control, you could have thrown her a wheel of brie and a packet of crackers and she’d be able to serve up a perfectly set plate while bouncing up and down.

Now it was time for the girls to ‘launch their own perfect pose’ in just 90 seconds with the winner to earn themselves a $1000 G-Star gift voucher.

Who did well?  Anoushka,  Ruth and Brittaney all came out trumps with some impressive photos.  Brittaney finally FINALLY came through and showed them all just how amazing she can be,

Who looked like a wet cat on a bouncy ball?  Melise, YaYa and shock horror – Sarah!  Yeah, Sarah…Sarah….she was left, she was right, she was up then down, she made Georges very nervous and me more confident in my own tampolining skills.

So Ruth wins the challenge while a little piece of Sarah’s winning light slowly fades away.

Team meeting time for Team Naomi to sort out the issues of Brittaney’s isolation from the team.  Chantal calls out Brittaney’s new found confidence as being strong with attitude unlike Ruth who is strong with no attitude while I call out Chantal for having strength with a massive hit of bitch.  Then in a scene reminiscent of Voltron, the girls merge together forming one gigantic monster that then proceeds to pummel Brittaney until she cries.

Once the tears dry up and Chantal stands out as the most unlikeable of the group, the monster is disassembled and there’s hugs all-round….for now.

Campaign Shoot: Mixing sport and fashion for stylerunner.com.  The brief is stylish and edgy with confidence while wearing high end sports wear.

The teams split off to practice poses before their mentors pop out and make them all do something completely different.  Team Naomi are being ‘active with javelins’, Team Nicole are ‘jumping with a relay baton’ while Olivia from Team Cheyenne is wondering just which end do you throw first of the javelin.

She get’s her girls to loosen up by making them all do star jumps and then clashes with Nikolina who feels uncomfortable with Cheyenne’s posing directions.

Nicole pushes her two remaining girls in a different direction, throwing out any form of exercise or athleticism in favour of a French Vogue type shoot telling Melise and Anoushka that “they’re models and not athletes”…you know…in case they forgot.

Team Naomi go for their shoot and Brittaney is promptly singled out by Naomi….”Shoulder down Brittaney, shoulder down” “Look at the camera Brittaney” “Brittaney i’m getting nothing from you” “Strength in your body Brittaney” “Bend back Brittany, bend back” “Here’s a blade Brittaney, use it on your wrists Brittaney”…

Team Nicole are looking hot and chilled while Anoushka’s abs come out to point and laugh at me sitting here eating half a block of cookies and cream chocolate.

So who won?  After learning the fate of Max Factors Liz Kelsh who chose Team Cheyenne last week, Stylerunner.com opts for Team Naomi for the win.  Even though the clients fawn and praise all over Team Nicole’s photo, they know better than to choose against Naomi Campbell.

The Elimination:  Cheyenne wisely chooses to put Olivia Sex Face into elimination over YaYa.  I would have made the same decision.  There’s a time and place for that face and it’s usually hidden behind a NSFW link.  Nicole has a tougher time, and decides her ‘trump card’ Melise should be the one to face elimination.

In the words of Naomi Campbell “Melise is a beautiful girl and one hell of a model, she just needs to be mentored in the correct way” So Olivia is going home right?

Unfortunately, Melise comes from Team Nicole – Naomi’s arch enemy, and this is where Naomi Campbell puts into place her plans for domination and SENDS MELISE HOME OVER OLIVIA.

Cue my hot angry tears and me screaming at Naomi through the television.

Next Week:  Models walk in stunning floor length gowns DOWN 50 STAIRS in front of people and a showdown between Naomi and Nicole that’s been building for several weeks!