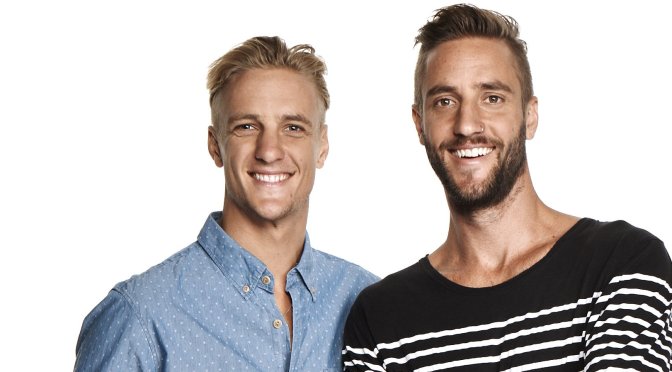 Surprises and disappointments as The Block Glasshouse fails to deliver on auction day for all 5 couples.

What’s the general feeling about tonight’s The Block Glasshouse finale?

#TheBlock is literally killing me

If your not willing to bid why bother coming wtf?! #theblockauction #TheBlock

Anyone else feeling completely devastated for the blockheads? All that work and no reward. #TheBlock

Pretty sure we just watched three of the five couples get kicked in the nuts – but that’s reality television isn’t it folks?

After catching up with the contestants, the wedding between Max and Karstan, finally seeing the reserve prices and choosing auction order, we finally got into the nitty gritty of auction time which usually results in gasps of shock and tears of joy and couples revel in new-found money.  This time however, it wasn’t a pretty result.

After a false start ( bidders refused to move off the reserve of $1.5 million) first couple off the ranks, Chris and Jenna eventually managed to sell their apartment for $1.81 million – $310,000 over reserve.  We all at home breathed a sigh of relief as the couple avoided a disaster and walked away with some mega coin in their pocket.

While these figures are no where near what we’ve been treated to the past few seasons of The Block, $300,000+ is nothing to scoff at.

It’s here when things began to go downhill and the grey in host Scott Cam’s hair began to push on through.  Couple three – Max and Karstan had the highest reserve and the other contestants, their estate agents and pretty much all of us at home were expecting big numbers – but what we expect and what actually happened are two very different scenarios.

Max and Karstan’s reserve of $1.67 Million (minus the $30,000 bonus) saw the couple’s auction falter from the very beginning.  An opening bid of $100,000 under reserve and no real interested bidders saw expectant smiles turn to tears as the hammer went down on a final bid of $1.71 million – $40,000 above reserve.

A general “wtf just happened” hit social media as the couple expected to win the season walk away with only $40,000 profit. While it’s not the first time such a poor result has happened on the show (All-Stars Mark and Duncan nabbed $25,000 for their efforts) I don’t think anyone saw this result happening.

Dee and Darren, couple number four, entered the auction a little more hesitant after the poor result for Max and Karstan and rightfully so.  While often judged for poor attitudes, there was no denying the finished apartment offered by the couple was nothing less than perfect.  Unfortunately, none of the bidders saw it like that.  Their reserve (equal lowest with Michael and Carlene at $1.4 million or $1.37 million minus $30,000 bonus) saw bidding halter almost immediately and finally selling for $1.38 million.

By this stage, two of the four couples are walking away with over $300,000 while the other two combined make up $50,000.  Pretty safe to say, there were more than a handful of expletives shouted in almost every lounge-room tonight.

last couple Michael and Carlene (yes, I WANT that lounge/dining room) entered the auction with the lowest of expectations after the previous two results.  Just like Dee and Darren, they started with a reserve of $1.4 million which was taken down to $1.38 million after their bonus was subtracted.  Good thing is was as at one point, the discussion of passing in the apartment was talked about.

While passing in seemed like the best option (a property has not been passed in on The Block since season 4, when three of the four properties failed to sell at auction) a final bid of $1.39 million meant the couple walk away with only $10,000 profit.

Michael and Carlene were my favourites… Whyyy?? So heartbroken 😢 #theblock

Feel for @Michael_Carlene and @KarstanMaxine. You created beautiful homes and I've enjoyed watching you this season on @TheBlock9 #TheBlock

@Michael_Carlene Your apartment is amazing and you guys deserved so much more!! #MichaelAndCarleneForAllStars #TheBlock

So what caused, as Scott Cam says “the most traumatic and bizarre auction I’ve done“.?  Could it be the reserve prices?  The fact some of the apartments had no windows and the only source on natural light came from the exposed terrace?  How is it that couple Chris and Jenna, who placed the lowest 7 times after judging, walk away with so much money compared to Michael and Carlene who topped the judges board?

There are some reports noting that over the top reserves for the location plus the lack of interested bidders played a massive part.

Sound off in the comments below!

Either way, I can’t imagine this to be great advertising for wannabe Blockheads for the next 2 series (yes, another 2 series is already in the works!) of The Block.