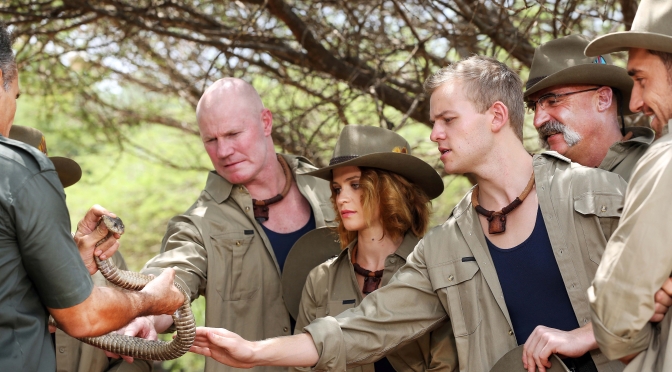 It’s going to be a battle royale tonight with reality juggernauts My Kitchen Rules, The Block Triple Threat and I’m a Celebrity Australia all invading our televisions tonight and all starting at the same time, leaving me wondering just which program is going to fall into the cancelled bin.

I finished watching the first episode of I’m a Celeb last night (on delay as a roast lamb dinner at the parents place was in order) and quickly brought up the digital TV guide for tonight only to sit there blank faced.  Shit.  MKR, The Block and I’m a Celeb are all scheduled for the same start time – 7:30pm.  It’s a tough call.  Which do I watch live and which do I record to watch after?

It can only be two programs considering the current running time for each show is a minimum 2 hours (it’s actually 1.5 hours but we all know now how this really works) and it’ll be almost 11pm by the time we’d have finished watching two programs leaving me to wonder, just which show is going to….well….die?

MKR has a strong fan base and even though over the past few seasons we’ve seen the cooking show move away from the food to the contestants, the show is still a massive draw-card for Channel 7’s weeknight prime time line-up.

The Block Triple Threat, well, 9 were smart getting in early before the other two but fell victim to 7’s Australian Open coverage.  Even with the less than stellar ratings, we’ve all invested a week with the show already, seen one couple booted with another to go this week.

I’m a Celeb…kudos to Network 10 for the build-up and advertising leading up-to it’s premiere last night.  1.19 million viewers smashed The Block’s opener but will the premise of ‘celebs’ stranded in the South African jungle enough to lure viewers away from such strongholds as MKR and The Block?

So what am I doing?  Easy call in fact.  Tape The Block and watch MKR live.  It’s what I’ve always done and will continue to do leaving behind our celebs in the jungle.  To be fair, it’s not the show’s fault…it’s simple enough to watch (just like the other two) and quite enjoyable but Ten’s decision to push it up against two of the biggest reality shows in Australia…Ten’s got big balls that may be about to be deflated.

What will be your viewing schedule for tonight?  Sound off in the comments below!

One thought on “#MKR #TheBlock #ImACelebAU : What Are You Watching Tonight?”