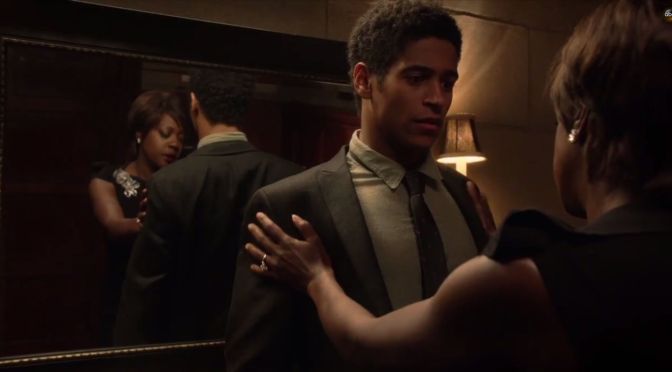 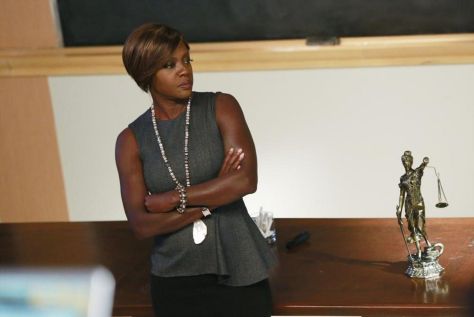 In all it’s gravelly deepness, star Viola Davis manages to rip out the title of this show on no less than three occasions during the pilot and with each mention, she manages to make it sound more and more like she’s an emcee at a serial killer convention.

There’s no messing around with How to Get Away With Murder (or HTGAWM as the full title is a complete bitch to continuously write out) though.  4 college students furiously fighting in the dead of night, in the middle of nowhere, over a dead body.  It’s this hectic and fast-paced opener that introduces us to the world of criminal defense lawyer Annalise Keating (Viola Davis) and her entourage of college law students/murderers.

Through flashbacks, dating from three months ago to present day, HTGAWM gives us pieces to a very large puzzle where each piece brings us closer and closer to revealing the full events of the night in which our hapless students found themselves in the middle of the woods frantically bickering over a dead body.

Their teacher, Annalise Keating, is a tough as nails, take no bullshit criminal defense lawyer slash college professor who is admired and feared at the same time and like all of the female leads living within the Shondaland (Greys/Scandal/Private Practice) universe, it appears Annalise has it all. A hugely successful career with a resounding reputation, a kick ass selection of wigs and killer wardrobe, a loving husband and students who worship and want to be her, but behind closed doors, Annalise’s affair with local cop Nate (Billy Brown) and the dealings of her sketchy husband Sam (Tom Verica) begin to tear down the walls Annalise has so heavily fortified.

And while HTGAWM is mostly about Annalise and her behind-closed-doors-life-versus-her-public-one, her students also play a large part in what the show has to offer.

There’s good girl  Michaela Pratt (Aja Naomi King) who attains to be like Annalise one day, Wes Gibbins (Alfred Enoch) who was accepted into class off a wait list and quickly falls behind the class, Connor Walsh (Jack Falahee) he of no morals and who can slut it up with the best of them to get information to win a case, quiet Laurel Castillo (Karla Souza) who may not be as innocent as she puts out and Asher Millstone (Matt McGorry) the cocky loud mouth who misses out on all the murder action.

While this murder itself is the season long story-arc, HTGAWM also strings along side stories allowing Annalise to not only showcase her talents as a criminal defense lawyer but teach her handpicked interns just how exactly one can get away with murder.

HTGAWM is a gutsy effort that tops my list of new dramas for the 2014/15 season and rightfully so.  Even though there’s an entire roster of characters we are introduced to in the first episode, it’s not long before each and every one start to stand on their own and have you questioning their motives behind the predicament they have found themselves in.

While HTGAWM has attachments to Shonda Rhimes (Greys, Scandal and Private Practice) and her Shondaland production empire, Peter Nowalk, (Co exec producer of Scandal) is the mind behind this not so small legal turned murder mystery drama.

How to Get Away With Murder begins Tuesday, Feb 10th, 9pm on Channel 7.