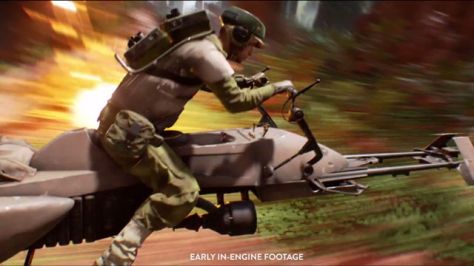 The newest installment of  Star Wars Battlefront has gotten a lot of people (myself included) very excited.  Since it’s announcement at the Electronic Arts’ E3 back in 2013 by EA Dice, we’ve all been salivating at the luscious movie-like graphics with each and every teaser reveal.

Now, finally, we have a release date here in Australia.

This third Star Wars Battlefront release (the first by Dice) will be officially released November 19th (perfect timing to coincide with the new Star Wars The Force Awakens movie) with pre-orders now underway with EBgames and other gaming outlets.  And while it’s no new news, ps3 users are being bypassed with this game in favor of PC, PlaySation 4 and Xbox One owners.

Star Wars Battlefront is shaping up to be one of this years most anticipated games with key features including the ability to visit classic planets from the original Star Wars™ trilogy, detailed with an unprecedented amount of realism and sense of authenticity that will transport you to a galaxy far, far away.  Experience amazing digital replicas of the original Star Wars movie models, brought to lifelike fidelity by DICE’s use of photogrammetry technology

Players can engage in epic battles on iconic planets including Hoth, Endor, and Tatooine. Also, bring the fight to the previously unexplored planet, Sullust.  Pilot a diverse set of ground-based vehicles including nimble speeder bikes, massive AT-ATs, and more.  Play as some of the most memorable characters in the Star Wars universe including Darth Vader and Boba Fett and encounter a variety of beloved characters from the original trilogy such as     C-3PO and R2-D2

While no actual game play footage has been made available, the stunning reveal trailer below shows what fans can expect when the game drops.