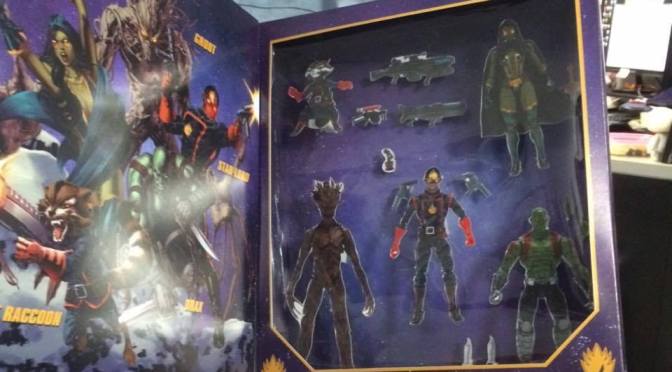 Last week, images began to surface of a mock-up of a Guardians of the Galaxy Marvel Legends box set getting many galaxy and marvel legends fans excited and now, the box set has been confirmed and is up for pre-order.

The 5 pack set contains all of the guardians in one set in the legends 6″ sizing and all featuring the comic book series looks versus the different movie based looks.  Gamora comes with a cloth poncho and interchangeable head, Star Lord comes with alternate weapons and Drax comes with a second pair of hands and a baby Groot.  Rocket Raccoon is included along with an 8″ Groot.

This 5 pack set is exclusive to retailer Entertainment Earth and is retailed at US$120 (with a shipping rate to Australia of US$97!!!!) with a release date set for August this year.

From Entertainment Earth: “Your favorite heroes from Guardians of the Galaxy are here in 6-inch scale, with fantastic accessories and more firepower than you can shake a stick at! Bring home the exclusive of the year with this Guardians of the Galaxy Comic Edition Marvel Legends Action Figure Box Set from Hasbro that includes 5 awesome figures in costumes you won’t find anywhere else… and a bonus baby Groot. Plus, the fifth-panel display box lets you see all your figures and gear without having to open the box!”