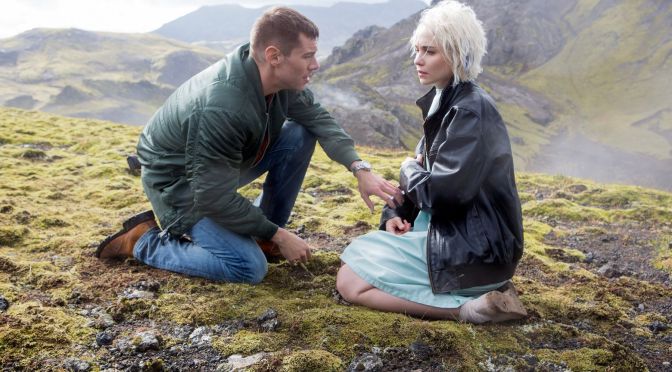 I’m probably going to cop some backlash for what i’m about to say but I feel somewhat lost and need to express.  I’m four episodes down in Netflix’s brand new series Sense8 and I have no bloody idea what it is i’m actually watching…and i’m at breaking point to not continue on.

I don’t actually even know where to begin to describe what Sense8 is actually about.  The premise is so jumbled and overflowing with a mass introduction of characters that after the first hour, I couldn’t remember what I had just watched or picked out any specific event that took place with the exception of the opening scene where Daryl Hannah (I assume) gives birth (to something) then shoots herself in the head.

I had to go searching just to find a reasonable explanation of what I had just witnessed and the best I could find was “But the core premise of Sense8 is pretty easy to explain — it’s kind of like X-Men. The show’s central “sensates” (there are eight of them, hence the title) are the next step in human evolution. They live all over the globe, are of all genders and sexualities and races, and only find themselves “activated” after a woman named Angelica (Daryl Hannah) kills herself in the opening moments of the first episode.” – Vox.com

The story-telling in these four hours that I have just watched is so slow and sedated that I feel disoriented and stupid for not understanding something that perhaps is right in front of my face.  Yes, these eight strangers have become mysteriously telepathically connected thanks to Daryl Hannah but at what purpose?  Even when Naveen Andrew’s shady character was explaining to Cop Will Gorski (Brian J. Smith) about what was happening, the body transference that was taking place from car to car was so extreme that I left the scene even more confused than before.

The problem I’m seeming to come across with Sense8 is it’s over-reaching want to be flashy and artsy yet character driven but it’s at the sacrifice of moving the story along at a relatively respectable pace.  Why is it, that a quarter of the way though the series i’m sitting here asking myself “what the bloody hell is going on?”

Even when I asked my twitter followers about whether or not I should indulge in Sense8, the replies weren’t at all revealing…

@AnthoBuzzTV its strangely riverting. Nothing to do with the sex scenes of course!!

@AnthoBuzzTV yes! First ep didn't make sense but the second ep made up for that. Looking forward to watching more.

I will applaud the incredible diversity in characters and casting for Sense8.  The trans-lesbian, the South Korean banker-slash-martial arts queen, the closeted Mexican actor, the African Van Damme bus driver, the Icelandic drugged out DJ…there’s not a cast like it on television, but the downside to such a big roster is trying to knit these eight personal dramas into one wearable jumper and sadly, to me, it feels like a jumper made for an octopus (see what I did there?!).

Part of me is hopeful that if I continue into hour five of Sense8, suddenly everything becomes crystal clear, but, there’s that dreaded feeling of knowing that after giving four hours of my life, there’s still no revelation or light at the end of the tunnel.

Are you struggling like me?  Am I missing something major and just an idiot for not seeing it?  Sound off in the comments below!