With less than 2 weeks to go until the Black Ops 3 beta opens for PS4 owners (who have pre ordered the game) more and more information is starting to come out regarding some of the inner workings of the game – more specifically (and what piques my interest) the customization within the game.

With the addition of basic player customization in COD: Ghosts through to the more expanded options in COD: Advanced Warfare, the ability to make your multiplayer character look and feel unique has added an extra layer to the already popular game and with BO3, Treyarch are taking the best of what’s already been offered and fine tuning it to produce a customization aspect that fits more visually with the game.

From the onset, players will chose one specialist class – Nomad, who can re-spawn from his death spot, Prophet, who has a penchant for guns with electricity shocks, Outrider, who’s bow and explosive arrows offer quick, one-shot kills, Reaper, a robot with a mini gun arm, Seraph, a quick footed powerhouse with a killer handgun, Ruin, who comes with a brutal melee attack and Battery, a tough girl who likes to play with touch exploding frag grenades.  From there, players will have the option to customize their chosen specialist with a selection class locked items.

@whalebait_99 It's our opinion that boots etc. are cool, but too subtle in how they modify look for custom characters like Specialists.

As someone who enjoyed the vast amount of options in AW, I can completely understand and support the reasoning behind the change when in reality, the only person really looking at my characters boots and gloves was probably me (though being able to properly check out each players decked out character in the gaming lobby was a cool touch) and during game play, those subtle items are virtually not visible to other players, though just how many options will be available (fingers crossed for more than 5 ugly head options for females that were offered in AW), an option to adjust item color (within reason) and the ability to obtain additional or rare gear (like AW’s exciting supply drops which Treyarch have confirmed are NOT part of Black Ops 3) have not been revealed.

Another change to the character customization is the female base figures.  Where Ghosts and AW finally allowed female soldiers into the game, they were created with the same bulky and muscular body shape as the males….

While Advanced Warfare toned down (somewhat) the bulkiness of the female form, it was still quite visible to see no real difference between a male character and female character with the exception of the head.  Treyarch have created a completely separate render, graphics and set of animations that, as Treyarch’s studio head Mark Lamia who spoke with playstationlifestyle states “It’s not just a female head on a male body. It’s like a different rig and a different set of animations that they did for the entire game”.  it’s a smart new feature that will allow a form of visual difference to the character and game play without forcing ultimate femininity into the game.

This new gender visual plus customization options also now spill into campaign mode with BO3 becoming the first ever Call of Duty game to offer the ability to not only play the solo story as either a male or female, but also play with various options to fit them out with a unique look – but users must note, PS3 and Xbox users will miss out on the campaign mode as Treyarch are ditching the mode for last gen consoles.

From COD producer James Blundell (who also spoke to playstationlifestyle) “You can be male, and you can be female. And by the way, that means you’ve got a full female track for the whole thing as well. So male track, female track. Customize that character, change the outfit, weapons, paint job- err, Paintshop, you know, all that good stuff. Equipment that your putting on there. That is all represented in those third-person cameras and you are the hero of that moment.” – this also includes all cut scenes too.

In the end, what we end up with, is the possibility to not only invest time into personalizing our multi-player character, but our campaign character too.  It’s a brand new feature that actually has me contemplating not jumping straight into multi-player for the first time ever and ignoring campaign more for 3 or so months.

Check out some brand new multi-player and campaign mode captures below! 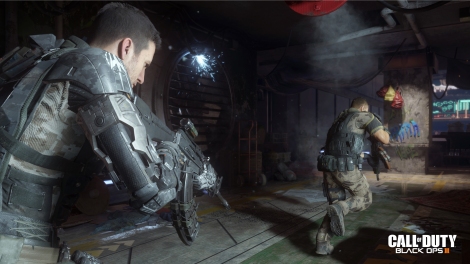 Black Ops 3 five-day beta hits PS4 users August 19th to August 23rd, PC/Xbox from August 26th to August 30th.  Beta will provide access to 3 multiplayer maps, 7 game modes, 8 customizable specialists, weapon customization including paintshop,   weapons, perks, equipment and score-streaks can be unlocked (but won’t transfer to the full game) and for those wanting to know more can check out this drool-worthy 10 minute multi-player clip below!

UPDATE: Oct 2015 – Read more about what to expect for customization when BO3 drops in November!