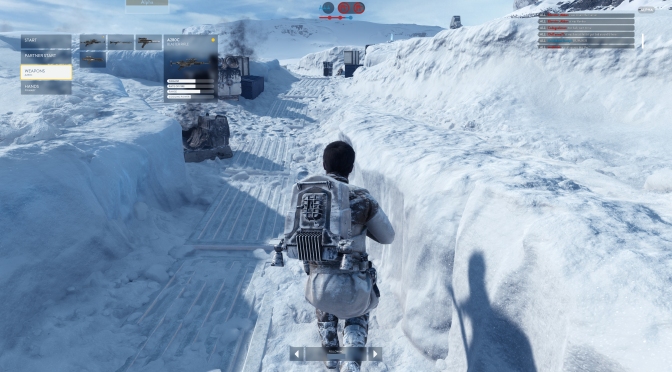 Star Wars fans unite as the playable beta for the soon-to-be-released Battlefront game is now open for play and it’s FREE for all PS4, Xbox1 and PC users!  While I may not be the biggest star wars fan, I am fond of the series and what it has to offer to both cinemas and gaming and by the looks of it, both are set to make a big impact on fans.

The free playable beta straight up offers three modes of play – a ‘survival’ mode on tatooine that can either be played solo or with a friend in co-op that has you as a rebel fighter going up against hoards of storm troopers, shock troopers and AT-TE’s.  There’s also two multiplayer modes open for play with ‘drop zone’ that is basically a zone wars game and the larger scale ‘walker assault’ which pits rebel soldiers against storm troopers, AT-AT’s, player controlled tie fighters, Luke Skywalker and Darth Vader.

Of the three game modes, it’s the ‘walker assault’ that’s the biggest draw card showcasing a ridiculously large free-roam map with a total of 40 players within a single game.  For the most part, I found myself splitting my time between the two multiplayer maps enjoying both game modes equally.

That said, the beta is not without it’s problems even though the game will appeal to both star wars fans and first person shooter fans.

*The graphics are just insane.  Like crazy insane.  The snowy, rocky landscape featured in Hoth’s ‘walker attack’ is crisp and lush and textured while the reddish and brooding terrain on Sullust in ‘drop zone’ is equally stunning.  From steaming sinkholes to snow capped mountains, DICE have truly created a beautiful looking game.  Even when in a 20v20 game of Walker Attack, everything is incredibly detailed and sparse and visual.

*Game play is incredibly smooth.  All three game modes available, while mostly standardized within multiplayer games, feel new and fresh and make use of the entire map.  Weapons don’t feel over powered and the bonus cycler rifle is a personal favorite weapon.

*Servers ran well and so far have had no issue with getting kicked out of a game, lagging or even finding a game.  Even the ability to join friends in the same lobby was pretty pain free thanks to the size of the games.

*The multiplayer hub is a neat idea that allows users -while waiting for a game to start – to customize either their star card hands (more on that later) choose their weapons or customize their player without the worry of being ported into a starting game without saving any changes.  Once ready, you can then jump straight into the game and continue on the fight for good…or evil, though don’t linger for too long as there is a limit of being idle before being booted from the server.

*The game feels like it’s Star Wars.  And in general, that’s what fans want.  Battlefront doesn’t feel like a rip-off or even sub-par, it feels like what we’ve known and loved for all these years.

*The Star Cards your player holds ultimately decide what ‘accessories’ your player holds.  From thermal detonators to sniper rifles to jump packs, each one offers the ability to change up game play.  The downside is that at any given time, you can only hold two cards, though I’ve seen some players with three, and it feels limiting to what you can allow your character to start with.

*The blasters are a great addition to the game and the four available in the beta flow across both troopers and rebel soldiers – but, there are no options for add-ons.  No scopes, no grenades, no quick-cool-down feature.  I guess this would keep things pretty even between teams but once again, feels limiting to what one could do when the game starts.

*Walker Attack is a fantastic game mode – when you’re selected to play on the side of the empire.  The only major downside of this mode is that it’s so one sided with the rebels attempting to outrun the empire and their AT-AT’s and AT-ST’s to stop the assault with coordinated airstrikes via controlled satellites that of the 15 or so games I played, the rebels won just once.

For any damage to be done to the massive AT-AT’s, the rebels must control two uplink points at once to call in a friendly attack but when it’s rebels vs empire troopers and walker vehicles…it all becomes too difficult and one sided.

*Spawning, as per the norm, was a nightmare.  With such massive maps, getting killed only to respawn literally in the middle on nowhere kills the momentum, especially when you have to run to the opposite side of the map just to catch up with other players who found themselves in the same situation.  The flip side is finding the enemy spawning directly behind or even beside you in random sporadic moments of wtf?!.

For what’s on offer in the beta, Battlefront actually impressed me to a point where i’m actually excited to see the whole game once it’s released and finally make the decision to add it to my list of pre-orders.  For EA and DICE, I think they achieved what they set out to make – a game that feels true to the Star Wars status.