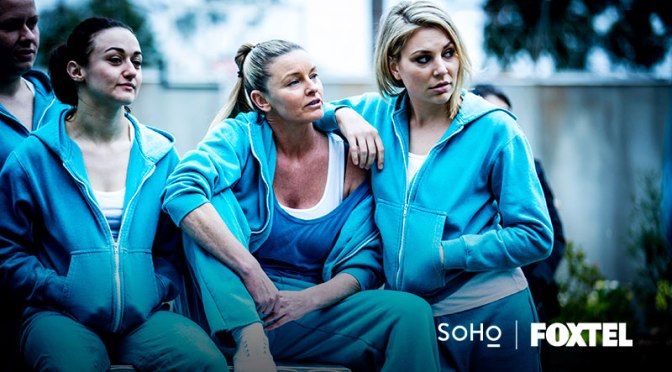 Why is everyone so shocked?!  I mean really come on, this is Wentworth people!  The team creating this show have always set the bar high for compelling television and continue to raise that bar with each and every season finale!

My last post, I offered up some season 4 end game theories which came off from not having previewed the episode but from reading what Wentworth had offered up during the season.  My score card?  Not the greatest…i’m giving myself a 3.5 out of 8….so not even 50% but let’s look back at that finale and how my I went in my predictions.

SPOILERS BELOW!!  Do not continue if you have NOT watched the season 4 finale!

1: Ferguson Becomes a Free Woman (sort of right) /// I was partially right on this one!  Joan did in fact find freedom after raking in Jake (Bernard Curry) to kill star witness Nils Jesper (Tony Nikolakopoulos).  It was a bold move on Ferguson’s behalf but that final scene proved that her freedom will be certainly short lived.

2: Sonia reveals her true freak (right) /// Sonia (Sigrid Thornton) kept us guessing for most of the season as to her guilt or innocence and as I called it, we would discover that Sonia in fact is a cold hearted murderer but in the way we found out was nothing short of chilling.  After a meeting with Det. Don Kaplan (Steve Bastoni) Liz (Celia Ireland) discovers that the body of Sonia’s missing friend had been found with a shaved head.  It was an odd mention to reveal and after seeing Sonia’s devastated response to her friends death, Liz believed Sonia to be innocent.  It’s not until Sonia offers to be the one to shave Maxine’s head as she goes through chemotherapy that Sonia, so calm and gentle mind you, mentions the power one has when shaving someone’s head and that it’s a symbol of rebirth.  It’s the first reveal of Sonia’s inner freak that Liz or us viewers have ever seen.

3: There Will be no Top Dog (wrong) /// Karen (Tammy Macintosh) says early on in this final episode that she doesn’t want the job…”let someone else take charge”.  It’s after a brutal fight between herself and Bea in which Bea believed Kaz to be the one to give Allie (Kate Jenkison) a ‘hot shot’ that she overdosed on.  It’s not until she’s ‘drafted’ by the other imates that she accepts the job of prison top dog.

4: Boomer Does not Fall Pregnant (right) /// It was only a short scene, a very quiet mention in which Boomer (Katrina Milosevic) reveals to Liz that the pregnancy didn’t take.  While only a blink-and-you’ll-miss-it scene, it was another touching moment for Booms this season.

5: Vera Will Discover Jake’s Past Offences (wrong) /// Jake managed to not only keep his secrets hidden from Vera, he left his co-worker Will Jackson (Robbie Magasiva) exposed as he kept his tracks hidden when Vera (Kate Atkinson) demanded an officer wide drug test to try and find who helped smuggle the drugs in that somehow ended up in Allie’s veins.

6: An Inmate Will Die (sort of wrong) /// To be clear, Allie woke up from her coma and Bea…well they can’t kill Bea right?!  Wentworth played a sneaky game on us by making us believe Allie would not wake from her induced coma thanks to the overdose provided to her by Joan.  In the meantime, we all believed that Bea would finally get her final revenge on Joan for those actions but when the tables turned on Bea, she, like us, all believed there was no hope for Allie and literally surrendered herself to the brutality of a stabbing with a screwdriver.

7: Doreen’s Sentence is Extended/Reduced (sort of right) /// While there was no mention of Doreen’s (Shareena Clanton) current sentence being altered, it was revealed she “doesn’t have that much time left” and that it should play well for her if she were to request a transfer to Perth where Nash (Luke McKenzie) is currently holed up with their son Joshua.  There wasn’t much more for Doreen this episode but it looks like this decision will play heavily into her story line for season 5.

8: Franky Distances Herself from Wentworth (wrong) ///  Can I just say though, was I the only one thinking the worst when Franky (Nicole da Silva) put the gun she took from Shayne (Hunter Page-Lochard) into her pants outside the court where Joan’s trial was taking place?!  While that scene decided to go no where, it seems like Franky has no desire to remove herself from the ladies inside Wentworth and that was shown in a touching scene between herself and Bea in the visitors room where the two talked love and life.

So there you have it.  Another wonderful season, another spine tingling season finale!  Will Bea survive her attack?  Will Allie make a full recovery?  What will happen to Ferguson? Will Jake keep his secrets close? Will Doreen make the transfer to Perth?  Will Franky and Bridget live happily ever after?  Sound off in the comments above!