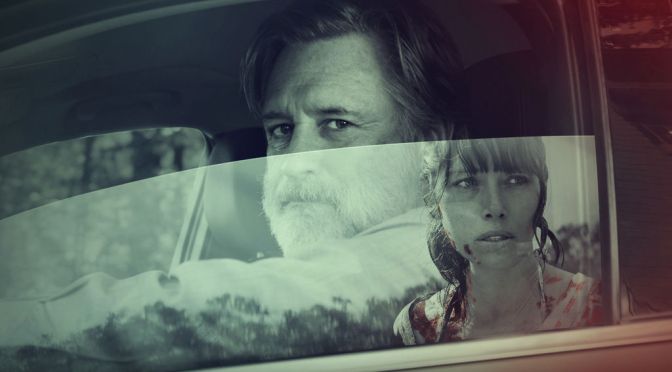 We’re heading into that “TV lull” time of year where all our favorite weekly must-watch shows head into hiatus during the extended Christmas and New Years break and shows such as The Big Bang Theory and The Simpsons feel like they’re on for three hour stretches, seven days a week.

Thankfully, those with access to Netflix will be able to fill a small portion of the upcoming TV void with this years sleeper hit that has been sweeping social media with talks of praise it’s binge-worthiness.

The Sinner is an 8-episode series starring Jessica Biel (7th Heaven) as downtrodden mother Cora Tannetti who seems to be living a very plain and ordinary life with her husband Mason (Christopher Abbot) and their young son. It’s nothing too exciting but there’s something up with Cora and it feels as though she has succumbed to this monotonous life she is living and has basically checked out.  Moments of silent vacant stares and this need to escape the desperation that is her life.

This all leads her to commit a very public and graphic murder in an unprovoked and very shocking attack that while brief in its moment, is the driving force for the entire series.  The Sinner is not a whodunit but in fact a whydunit (if that is an actual word – and if a murder mystery can be a why and not a who!)

For you see, while we know Cora kills someone, she has no idea why she committed murder as she has no idea who the victim is or what came over her to commit such an act and in what should be an open and shut case for the local police, becomes an obsession for local detective Harry Ambrose (Bill Pullman) who believes that there may be a more dark and sinister reasoning to Cora’s crime.  With his help, the two begin to traverse the twisted and morbid memories of Cora’s strict religious upbringing and subsequent rebellion that led to the driving moment of the series.

When it comes to the stars and their acting within The Sinner, Pullman plays sad lonely cop well with his long graying hair and department store suits.  His unnerving desperation to solve the answers to this case while trying to solve the problems of his marriage culminate in one particular scene where a garden hose cops the brunt of his meltdown.

Having been more known as Mrs.Timberlake for the better part of six years, Beil sheds all former glamour to play the bare faced, red eyed and prison jumpsuit clad Tannetti.  A kind of “where has this version of Beil been?” reaction ensues as the first episode closes.  Equally compelling is Nadia Alexander as Cora’s terminally ill younger sister Phoebe.  The guilt about her ailing health comes flying at Cora not only from her overtly religious mother but from Phoebe herself who uses her illness to manipulate Cora into situations she would have normally avoided.

For most of the series run, with each episode, there’s enough information coming in to keep us just on the edge of figuring out the entire plot but also stringing us back into a void of unknown and if there were ever an award for “best use of binge moments” then The Sinner would surely win for their perfectly timed end of episode cut off that literally leaves you begging for more.

The final two episodes is where everything hits us and while most is all revealed in episode seven, the supposed big shock reveal that happens in episode eight actually doesn’t hold the effect it perhaps was intended to.  Maybe because of who it involves or because even though we have most of the answers by that time, the episode still feels rushed as it tries to tie everything up.

For its binge-worthiness and stellar turn by Jessica Biel, The Sinner get’s an 8/10 from me.

The Sinner is now streaming on Netflix Australia