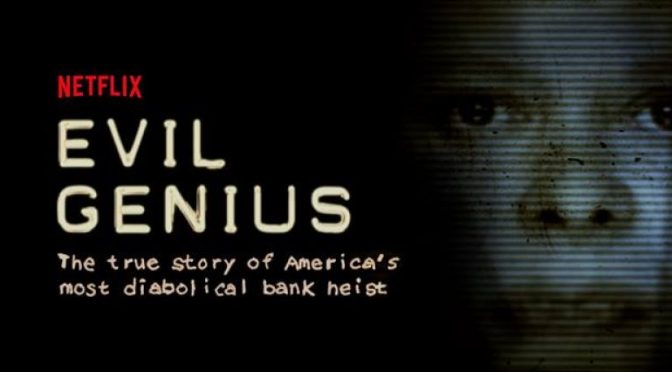 The True Crime genre love that has been drawing in viewers for some time now from Making a Murderer to The Keepers and The Staircase among others, has a new must-watch show featuring one of the most bizarre cases ever documented.  Evil Genius: The True Story of America’s Most Diabolical Bank Heist recently dropped on Netflix and the four part documentary has enough of all the right genre ingredients for it to be binged in a single sit and leave us wanting more.

At the very base of this case is the town of Eerie, Pennsylvania and a pizza delivery driver named Brian Wells who robs a bank with a working walking cane gun (it’s literally something out of James Bond), a note demanding $250,000 – and a collar bomb around his neck.

After obtaining less than $9000, Wells leaves the bank, is apprehended and while waiting for the bomb squad to arrive, dies when said collar bomb explodes in one very graphic and horrific scene that has traumatized me since viewing. Moments after Well’s shocking death, it’s discovered he was on a scavenger hunt, following a map and instructions in order to defuse the Saw like collar bomb.

The web of this case begins to expand when one of Well’s co-workers mysteriously dies only days later and two people – Bill Rothstein and Marjorie Diehl-Armstrong – enter the fray with a third dead body sitting frozen in Rothstien’s chest freezer.

This fascinating case features master mind criminals, red herrings, crazy theories and law enforcement bungles – just as others in the genre have – but unlike those, the focus on the judicial system is just a haze as the unusual circumstances within this case are just too outlandish to not be put front and centre.

Of the two criminals in this case, Diehl-Armstrong is the only one still alive and the only one to actively communicate with director Trey Borzillieri about Well’s case and the ever expanding landscape that surrounds it.

Check out the trailer below:

p.s – for fans of the genre’, the compelling The Staircase is coming to Netflix along with three all-new episodes starting on June 8th!