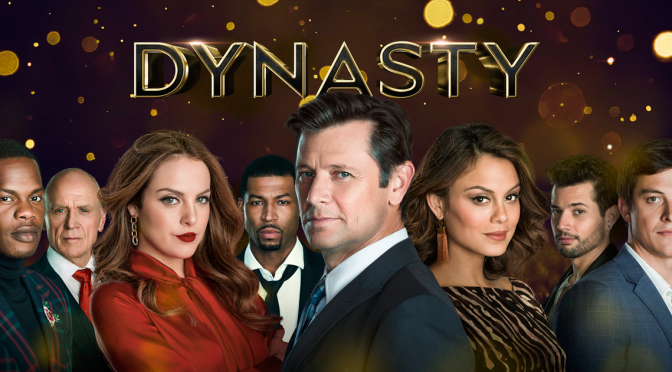 Since word began floating about of the CW networks plans to bring 80’s cult favorite soap Dynasty back to our screens, one of the biggest questions being asked was who will be playing the role of iconic character Alexis Carrington (played by Joan Collins in the original 80’s outing)

While the character was visibly absent from the reboot as it began, it had been confirmed that Alexis will be appearing towards the end of the series first season (which ties in with the original) with names including Heather Locklear, Laura Leighton, Elizabeth Hurley and Melinda Clarke all being thrown around as possible candidates to play Alexis.

Now, the CW network have found their Alexis Carrington and have let us all in on who nabbed the role which has gone to former Desperate Housewives star Nicollette Sherridan.

Alexis is the first wife of Blake Carrington and mother to Fallon and Steven. She will return unexpectedly to their world, challenging Blake’s marriage to Cristal, seeking to reunite with her children, and fighting to claim what is hers.

A modern re-imagining of the iconic prime-time soap, the series centers on the powerful Carrington family as they defend their throne against the Colbys, new rivals and threats, and even each other.

Dynasty is available to Australian viewers on Netflix Australia.

Spent the late afternoon revisiting our color selections for our @langdonbuilding house. Photo one is external - bricks, garage, roofing and paint. Photo two are the bathrooms, ensuite and main, light in one, dark in the other. Photo three is our flooring including the vinyl laminate and carpet plus splashback and paint! #LangdonBuilding #interiordecorating
Super happy with my #VinylPurchase Today! Headed over to #Talbot for their Sunday market and spotted @cathydennisofficial's debut album #MoveToThis on #Vinyl! #NowSpinning #InstaVinyl #vinylcollection
Took this driving from Geelong to Ballarat tonight. Nice to look at from afar, not nice to drive under! #VicWeather
Got to visit the block today and meet with the builder! Moving so quickly! Roof up this week and Windows going in shortly after that! 😁😁👍🤗 @langdonbuilding #WinterValleyRise #LangdonBuilding #WinterValley #Ballarat
I don't know how many people know but @c0rka and I are building our first home! Time to adult it is! Though it's exciting times right now as the frame went up this week!!! Starting to get a feel for what we'll have to play with once it's all done and dusted!
I also picked up this @thexfilesfox magazine from 1996 for $1 today and it features two posters shot by one of my favorite pop culture photographers @george.lange who has also photographed my number one favorite Laura Leighton! #Xfiles #DavidDuchovny #GillianAnderson #GeorgeLange #1996 #Magazine #90smagazine
New #Vinyl purchases today! #DonHenley's "All she wants to do is dance" 12" vinyl, ' The very best of @eltonjohn" double vinyl and three #LindaRonstadt vinyls a "Greatest Hits", #HeartLikeAWheel and #GetCloser. Plus all were 50% off! #NowSpinning #VinylJunkie #VinylRecord
Not bad for $11 if I do say so myself! #JumpForce #PS4 and #Overwatch #Symmetra mini figure for pennies after trade in!
Not gonna lie, this arriving today makes me very happy! Been a fan since 94' and this is just perfect! ✔✔👍💗 #Lauraleighton @lauraleightonforreal
Tell me what @playstationau games are you guys playing at the moment?! I tried Code Vein, loved the character customization but hated the game so I've resorted back to Overwatch and Apex Legends #PS4 #PlayStation4 @playstation #Gamer #Gaymer #Overwatch #ApexLegends
It really was.
First #Vinyl purchase of 2020 from #rediscovery in Ballarat (1st visit there!) is "Cry Like a Rainstorm, Howl Like the Wind" from Linda Ronstadt and Aaron Neville and featuring classics like "Don't Know Much" and "Goodbye My Friend" First time finding this one vinyl too! #LindaRonstadt #crylikearainstormhowllikethewind #AaronNeville #NowSpinning #vinylcollection #InstaVinyl