It’s been 20 years since Mattel released the first ever X-Files Mulder and Scully Barbie gift set featuring the spooky duo in conjunction with the very first X-Files movie, all the way back in 1998.

There were two versions of the gift set produced, the first and rarer version, was quickly pulled from shelves because it was deemed that Scully’s hair was too long and promptly replaced with a second release with shorter hair.

Fast forward 20 years later and the first images of new brand new Mulder and Scully Barbie Signature dolls have leaked online showcasing brand new sculpts of the duo made specially for this release. 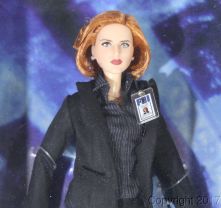 Each doll is packaged separately and while not 100% confirmed, may seem to include some points of articulation.  Both are dressed in screen accurate outfits from the show along with ID and FBI badges,

Slated to release later this month, one of the Scully dolls has already appeared on eBay (where the images came from) so it can’t be too soon before we see them hit our local retailers!