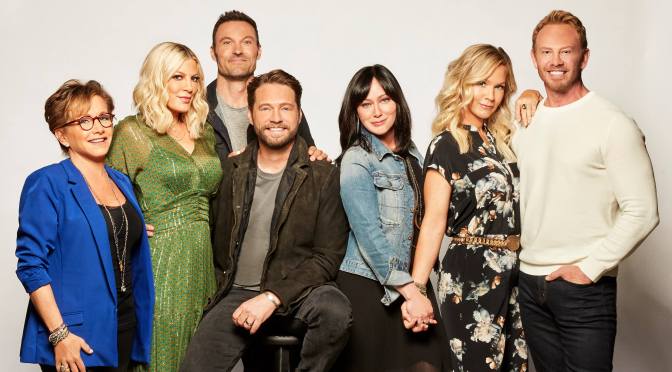 Let’s Talk About The Original: Anyone alive during the 90’s knows of 90210. You may be one of the few not to have watched it but you knew about it and the array of pin-up worthy cast members that made magazine covers world wide. The original premise of the Aaron Spelling series followed twins Brenda Walsh (Shannen Doherty) and Brandon Walsh (Jason Priestley) and their friends as they navigate their way through high school, college and into adulthood. Steamy love triangles, story arcs about drugs and alcohol abuse and romantic entanglements featured predominately throughout the shows ten seasons.

Let’s Talk About This Reboot: The reboot picks up 19 years after the original ended, where most of the main cast attend a 90210 reunion in Vegas (keep an eye out for 90210 super-fan Darren Martin aka 9021Bro on Instagram in this scene!) After a hilarious mini melt-down from Tori Spelling – which goes viral, real-life best friends Spelling and Jennie Garth to go about pitching a 90210 reboot to FOX (that in episode two brings in Christine Elise aka Emily Valentine, in a very clever way) and while the network loves the idea, they’ll only come on board if the entire cast is willing to come back. The task isn’t as easy is it should be with animosities, egos and broken hearts come into play.

Straight up, this new incarnation of 90210 smartly takes a new approach to the ‘reboot’ format by creating a scripted semi-reality-meets-comedy show that has the entire cast playing exaggerated versions of themselves (think James Van Der Beek in the fantastic Don’t Trust the B*tch in Apartment 23).

After exhausting every avenue of her ‘brand’ Tori Spelling finds herself close to broke with a career-stalled husband and a house full of kids, Jennie Garth is struggling with a teenage daughter who wants to get into the acting industry while dealing with the end of her third marriage. Brian Austin Green is living the sweet life thanks to his mega star singer wife Shay (La La Anthony) but wants to break from her overbearing star status, Jason Priestly has moved into directing but has anger issues dealing with his younger cast. Ian Ziering is crazily promoting his health and fitness empire any way possible while Gabrielle Carteris is the head of an actors union. Shannen Doherty…..let’s just say she’s found her spiritual center.

The premise of the show does have a some-what uneasy mix of comedy meets drama, because it never really knows what lane it wants to steer directly in to. Most of Green’s scenes involving his attempt at a career revival have a deep poke-at-the-industry undertone to them along with Carteris who finds herself trying to answer a question about herself that has suddenly appeared whilst Priestly and Ziering seem to be relishing playing exaggerated versions of themselves, milking the comedy out of scenes for all they can.

It is Tori Spelling however who seems to not only take the lead in this outing but is also the clear MVP. Chewing through scenes with comedic ease, it’s as if, Tori Spelling playing Tori Spelling was the role she has been waiting her entire post-90210 career to play.

So many of the reboots hitting television screens in recent times have tried to emphasize and encapsulate the nostalgia attached to it and while some work well, none have done it so hard on or taken such a left turn with the format as 90210 has done. The show itself has been strictly aimed at the 90210 fans, those who remember specific episodes, character hook-ups, outfits and quotes and while there’s barely any mention of notable former cast members (Tiffany Thiessen, Rebecca Gayheart, Laura Leighton, Vincent Young, Hillary Swank) or 90210’s sister show Melrose Place, the vibe of the show will be more than enough to satisfy the most diehard of 90210 fans.

Let’s Talk Final Thoughts: Simply put, BH90210 is a fun show that could miss an audience of those not familiar with the original but will sit very nicely with those who have. It’s wacky and touching and wink-wink-nod-nod at Hollywood while infusing enough of what was loved about the original.