Having only just recently finished watching the entire run of Breaking Bad, a friend asked me what my thoughts were on the show and in particular the finale.  My first immediate response was “I hated Walt”.  Apparently that was a pretty natural response as my friend replied “You’re supposed to by the end”.  It got me thinking how I could become so involved and enamored with a show in which you literally despise the lead character for all the bad he or she does.

That said, this does this not apply to every character that expresses dark behavior.   Take for instance Dexter Morgan (Michael C Hall).  The guy is a serial killer (who only kills bad people) whose actions led to the death of his wife Rita (Julie Benz) and several other innocent people along the way (Doakes, his sister Deb and LaGuerta to name a few) yet we are rooting for him to evade the law and continue on his merry killing way while, watching Breaking Bad, all I wanted was for Hank to get his man and put Walter White (Bryan Cranston) away for good.

Nurse Jackie’s Jackie Peyton (Edie Falco) is another prime example of a love/hate relationship.  The pill popping superstar nurse all but ruined her marriage, her career and treated friends and co-workers like trash all while downing copious amounts of pills and having an illicit affair and all I wanted was for her to get what she had coming.  I disliked Jackie Peyton for all the horrible she brought to peoples lives.

Yet going as far back as the 90’s with the Aaron Spelling soap Melrose Place.  Two of the show’s most devious characters Sydney Andrews (Laura Leighton) and Dr. Kimberly Shaw (Marcia Cross) both slept and blackmailed and even bombed their way through a decent run of the series, but in true form, all I wanted for these crazy ladies was to come out on top.

What I can’t get my head around is what is the difference between Walter White and Dexter Morgan and Jackie Peyton and Sydney Andrews? Each are flawed, each have done inexplicable acts and yet i’m divided as to who I root for and whom I want to receive their comeuppance.

Part of it, I think, is because we go into a show, say like Dexter, knowing he is a serial killer.  There’s no surprise shock act that makes us question our feelings towards him.  Same applied to Kimberly and Sydney on Melrose Place.  The two made a splash on their entrance, letting us all know they were here to cause trouble, while on the other hand, when we meet Walter White, he’s a married science teacher who’s discovered he has cancer.  We want to resonate with his less than perfect life situations and we do….but then we witness his actions of atrocity (including poisoning a little boy) and suddenly we begin to question.

It’s this tickle on our emotions that makes characters like Walter White and Jackie Peyton so different from those like the Melrose duo, Dexter Morgan even American Horror Story Coven’s Fiona Goode (Jessica Lange) or Tony Soprano (James Gandolfini) and Mad Men’s Don Draper (Jon Hamm).

Well you can’t say this year was a bag full of potatoes (as in, you know what your’e getting) as this years Emmy Awards were full of surprise wins and glaring oversights.  For the first time and a loooong tme, the usually strong Lead Actress Drama category has been at it’s weakest while Supporting Actress Comedy is still very strong.

So who won or should I say “graciously lost”?

I think most expected Kerry Washington to take the award for her role in Scandal.  It’s been a big season for her and with nominees including Connie Britton (Nashville), Vera Farmiga (Bates Motel) and Elizabeth Moss (Mad Men) the category was weaker than it has been in years.  That said, Claire Danes who actually won for Homeland was well deserved.  While it’s been sometime since the show was on our screens, Danes’ portrayal of bi-polar Carrie Mathison is unforgettable.

Remarkably strong category.  Many expected Cranston to win.  He had a strong lead up (A Critics Choice Award and SAG Award win) and with Breaking Bad now over, it was a shock that Daniels’ ended up winning.  I don’t watch The Nerwsroom so I cant judge, but considering other strong nominees included Damien Lewis (Homeland) and Kevin Spacey (House Of Cards) Daniels’ win is certainly a surprise.

Ok, so yes, Christine Baranski was a favourite to win.  She has definitely shone this season of The Good Wife but I think she was right up there with Breaking Bad’s Anna Gunn.  Both have been highly praised for their work this year, so no real surprise there.

This one was all about Breaking Bad.  Homeland could have been considered a close contender, but with Breaking Bad’s final season, it was a shoe-in the shoe was going to win.  Strong seasons from both, makes me wonder if Breaking Bad would have beaten Homeland had it not been it’s swan song season.

Who was expected to win?  Too Close to call.  Who won?  Julia Louis-Dreyfus.  Who did I want to win?  Happy with anything!

Always a popular category and love all that were nominated.  Toni Colette and Sarah Jessica Parker had a strong hold in the early 2000’s but for the last few years since then, Amy Poehler (Parks and Recreation) Julia Louis-Dreyfus (VEEP), Tina Fey (30 Rock) Edie Falco (Nurse Jackie) and Lena Dunham (Girls) have usually featured.  Laura Dern (Enlightened) was probably the least likely to win though all nominees have had a scorcher of a season.  I’d expect Julia Louis-Dreyfus to hold onto this category for a while.  She is crackers as Selina Meyer in VEEP!

Last years winner Jon Cryer (Two and a Half Men) wasn’t nominated this year (rightly so) leaving way for 2011 winner Jim Parsons (The Big Bang Theory) to reclaim his crown.  Alec Baldwin (30 Rock) and Matt Le Blanc (Episodes) would have been close favourites and I had wished there was a stronger Arrested Development presence too.  I’d expect to see a few new faces for next years nominations with 30 Rock and Arrested Development no longer on the air.

For a category that, for the past few years, has been dominated by Modern Family’s Jesse Tyler-Ferguson and Eric Stonestreet (who strangely wasn’t nominated this year) it was expected that Ferguson or co-stars Ty Burrell or Ed O’Neill would take it out.  Girls Adam Driver could have been a shock win for a very strong season.  Surprise win for VEEP’s Hale.  His character – Gary Walsh, could almost be that of his in Arrested Development just without the hook for a hand!

Yes, this has been Modern Family’s category for the last few years.  It’s a strong show that well written, acted and put together, but that said, 30 Rock and Girls have both had incredibly funny and interesting seasons (Girls though will never win as it’s like Desperate Housewives…more drama facets that comedy) and it would have been a nice way to say goodbye to 30 Rock.  Will be interesting to see what takes 30 Rock’s place next year.

Now for the bit I know you all want to know!  My best and worst dressed!! 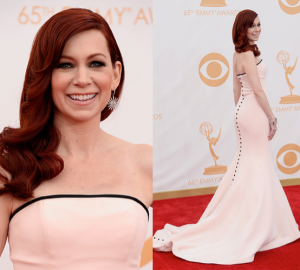 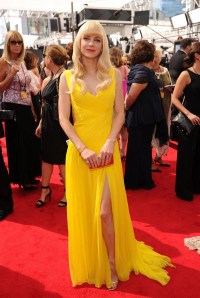 True Blood star Carrie Preston easily takes this one out.  She looked amazing!  Anna Farris (Soon to be seen in the new comedy Mom) takes a close second. 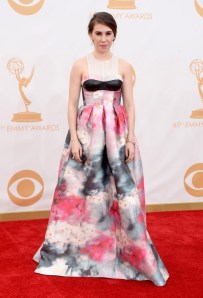 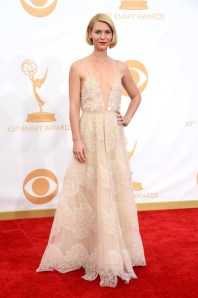 Girls actress Zosia Mamet was having all eyes on her for all the wrong reasons.  That said, her boobs were clearly the worst dressed.  Speaking of boobs, someone should introduce Claire Danes to the wonder of chicken fillets.  Just saying.