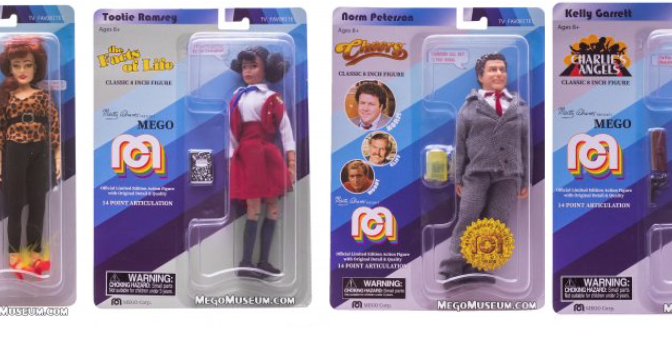 The toy company that ruled the toy isle in the late 70’s with their lines of 8″ Star Trek and DC superheroes action figures along with their iconic 12″ dolls of Farrah Fawcett and Cher is making their way back into Australian stores this year after almost four decades.

Mego was one of the hottest toy companies way back when to the point that in 1976, their first release Cher doll became the highest selling doll that year beating out Mattel’s powerhouse Barbie, but all the glory came crashing down when the company passed on an offer to nab the licence to (a then unknown) Star Wars and followed that up with a shift towards electronic and robotic toys that saw the company sadly file for chapter 11 Bankruptcy in 1982.

In the years between, prices for vintage Mego items have soared with collectors forking out huge bucks to fill in the gaps of their Mego collection. Vintage boxed dolls of Charlie’s Angels star Jaclyn Smith can rise as high as $400aud while those 8″ DC Heroes, in mint boxed condition, can see prices rise into the high thousands.

But, jump forward to 2018 and Mego Corporation is alive and well with Marty Abrams back at the helm announcing an exclusive deal with Target US that would see Mego figures back on the shelves for the first time since the late 70’s with licences for classic pop culture favorites including an I Dream of Jeanie double pack, Charlie’s Angels, Charmed, Cheers, a Full House Stephanie and DJ Tanner double pack and various original series Star Trek characters along with releases of classic monsters such as Frankenstein and Dracula. Add to this a brand new 14″ line with DC hero action figures for Wonder Woman, Batman and Superman and Mego Corp are well and truly back in the market leaving fans of classic pop culture wanting more!

With the Target/Mego deal ending this year, it allows for Mego Corporation to begin looking for worldwide distributors with Mego confirming that they are in fact hammering out a deal with an Australian distributor meaning we will finally see Mego in Australia in 2019.

Their recently announced fourth wave of figures includes an 8″ ‘legends’ series that sees Muhammad Ali, Farrah Fawcett and Marilyn Monroe (among others) immortalized in plastic along with a retooling of their 14″ DC superheroes which will see Wonder Woman and Batman in alternate costumes.

There’s no official word of yet as to whom will be stocking Mego, when we will see them or the price point but watch this space as Mego hinted at a huge announcement coming Wednesday (Thursday our time) that may reveal more. Watch this space!