From Fantastic Four’s Invisible Woman, Uncanny X-Men’s Storm and Phoenix to Avengers She Hulk and Scarlet Witch, Marvel’s female heroines have been at the forefront of the comic world and March will see our super powered femme fatales at the forefront of all of Marvel’s gaming programs.  While DC comics are using their female heroes to target young girls and adult collectors in their DC Super Hero Girls line, Marvel are hitting the digital gaming market.

Called ‘Women of Power’ the event will bring “new characters and content” to its portfolio of mobile, handheld, console, and PC games. Peter Phillips, the executive vice president and general manager of digital distribution at Marvel Entertainment, said the event will bring together “some of the most popular heroes and villains” in a “unique way for the first time.  By featuring these stories and characters throughout a single month, we’ve lined up one [of] the most exciting events in the history of Marvel games.” 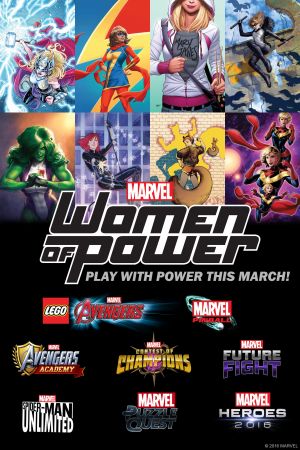 The line-up boasts an impressive number of mobile and console/pc marvel games that will all take part in the event including:

The announced events will kick in from March 3rd which also coincides with Marvels “Women of Power” variant comic covers month for Black Widow #1, Mockingbird #1, Moon Girl and Devil Dinosaur #5, Scarlet Witch #4 and Uncanny Inhumans #6 among others which will be released throughout March.

There’ll be at least three people dressed as Superman, a couple of Storm Troopers and some people dressed up in outfits referencing such obscure characters you’ll be wondering how comfortable they  could be under all the layers and body paint.  Yes, Supanova  Expo is almost here again!

As per usual, Gold Coast and Melbourne are the first stops with an impressive line-up of movie and TV stars available for autographs, photo sessions and even better, Q&A seminars, throughout the weekend.

Like every year, the event organizers at SupaNova have put together some amazing ticketing deals allowing the biggest fans get the best experiences!

There’s a Middle Earth Magic Pass for $250 which includes a group photo with cast members of The Hobbit, priority queuing for photo ops and autographs plus entry to the Middle Earth Q&A panel on the Sunday.

Also, there’s a Fan of the Arena pass for $250 for fans of Lucy Lawless and Spartacus which along with priority queuing also includes a group photo with Lawless and Manu Bennett (Crixus in Spartacus).

I’ve attended the last 5 events, meeting and getting photos with the likes of Barbara Eden (I Dream of Jeanie) and Eliza Dushku (Buffy the Vampire Slayer/Dollhouse), Peter Facinelli (Nurse Jackie), Charisma Carpenter (Angel) and Claire Kramer (Buffy the Vampire Slayer).  While the photo and autograph ops are great fun, it’s the Q&A seminars that are the most fun!  Great way to find out some unknown or rare facts about some of your favorite shows!

Update: James Callis (Merlin, Battlestar Galactica) and Freema Agyeman (Dr. Who, The Carrie Diaries) have been added to the Melbourne/Gold Coast line-up!  Manu Bennett has had to cancel due to Arrow filming running overtime while Lucy Lawless has had to pull out of all commitments from Sundays schedule, though she’ll still appear Friday night and Saturday.

To keep updated with all the news, hit the Supanova Expo Facebook Page!