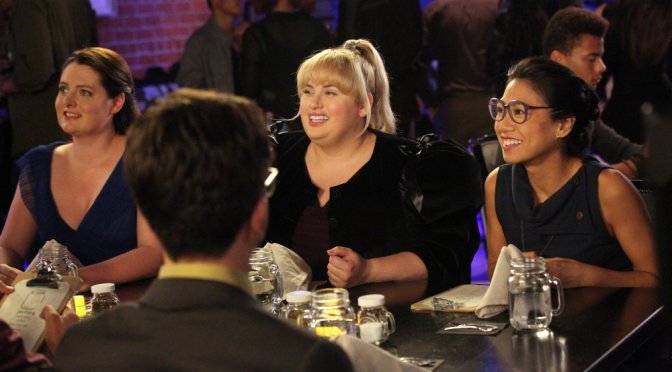 Rebel Wilson and Co seem to be settling into their roles and accents a bit more now with tonight’s’ Super Fun Night’s second episode (actually third when you count in the original pilot).  Rebel’s American accent is less knives down a blackboard and more Madonna flitting between London and Los Angeles.

So, tonight’s episode is entertaining!  In an attempt to widen their social circle, Kimmie, Helen-Alice and Marika try internet dating (involving a new three on three format) and with some online profile enhancement from Kimmie, the girls find themselves on a date in a trendy club (where food is served in jars) but not as who they would like to be (insert Russian accent here)

There’s some funny interaction between the girls and their dates as they try to keep up the charade, a kicker of a line from Kimmie involving the TV show Pretty Little Liars and keep an eye out for a magical little dance right at the end involving Kimmie and a glass jar!