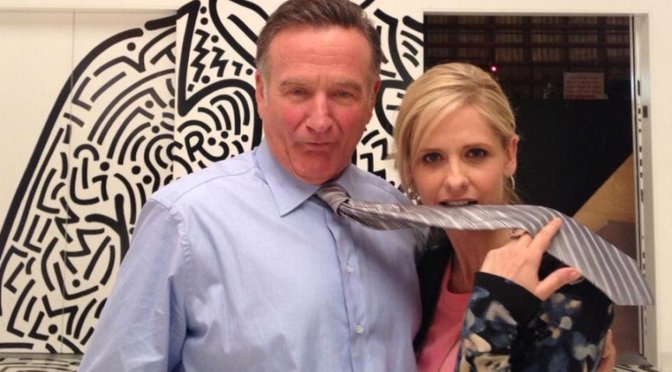 You know how Robin Williams can sometimes be a little too Robin Williams?  It’s annoying isn’t it?  What starts out funny turns into a 10 minute gag with multiple characters and accents and lots of uncomfortable laughter from those on the receiving end. Thankfully, Robin Williams is only slightly Robin Williams in The Crazy Ones.

This show seems like the perfect fit for Williams’ return to series television.  As legendary advertising agency exec Simon Roberts, he still gets to flex his funny bone but there are some serious undertones in Roberts’ back history (divorce and possibly depression) that keep Williams grounded enough to ensure he doesn’t fly too much into the crazy Robin Williams category.

Playing the perfect polar opposite is Sarah Michelle Gellar (Buffy the Vampire Slayer) as Simon’s straight-laced and all professional daughter and co-partner Sydney Roberts.  Gellar easily holds her own with grim professional determination playing opposite Williams and the two bring a believable father/daughter relationship on screen.

There’s also some great casting in the co roles with Hamish Linklater (The New Adventures of Old Christine), James Wolk (Mad Men) and Amanda Setton (The Mindy Project) who all get their fair share of laughs.

This first episode brings us straight into the action with a wayward Simon and a worrisome Sydney desperately trying not to loose their biggest client in McDonald’s.

The Crazy Ones premier’s on Sunday October 20th on FOX8 via Foxtel.

BTW  – keep and eye out for singer Kelly Clarkson playing herself in this episode.  She’s piss funny and should be brought back for more! 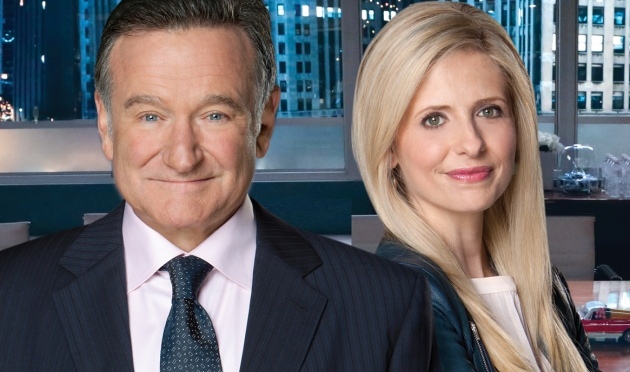 I had been waiting to hear which free-to-air channel would pick up new comedy The Crazy Ones due to premiere in the USA shortly and in a surprise move, Fox8 have picked up the rights to air the comedy starring Robin Williams and Sarah Michelle Gellar.  The comedy set inside an advertising agency sees Williams playing father to Gellar and is William’s return to series television since Mork and Mindy.

Oscar-winner Robin Williams returns to his television roots with his signature brand of humor in the inspired workplace comedy from 20th Century Fox TV, The Crazy Ones. As a renowned advertising genius whose unorthodox methods would get him fired – if he weren’t the boss – he heads a powerful agency with the biggest clients and brands in the world. The office is staffed with an eclectic group intent on keeping his antics in check, including his daughter Sydney (Sarah Michelle Gellar), who often questions her father’s sanity while trying to make a name for herself in the advertising world.

I also picked up this @thexfilesfox magazine from 1996 for $1 today and it features two posters shot by one of my favorite pop culture photographers @george.lange who has also photographed my number one favorite Laura Leighton! #Xfiles #DavidDuchovny #GillianAnderson #GeorgeLange #1996 #Magazine #90smagazine
New #Vinyl purchases today! #DonHenley's "All she wants to do is dance" 12" vinyl, ' The very best of @eltonjohn" double vinyl and three #LindaRonstadt vinyls a "Greatest Hits", #HeartLikeAWheel and #GetCloser. Plus all were 50% off! #NowSpinning #VinylJunkie #VinylRecord
Not bad for $11 if I do say so myself! #JumpForce #PS4 and #Overwatch #Symmetra mini figure for pennies after trade in!
Not gonna lie, this arriving today makes me very happy! Been a fan since 94' and this is just perfect! ✔✔👍💗 #Lauraleighton @lauraleightonforreal
Tell me what @playstationau games are you guys playing at the moment?! I tried Code Vein, loved the character customization but hated the game so I've resorted back to Overwatch and Apex Legends #PS4 #PlayStation4 @playstation #Gamer #Gaymer #Overwatch #ApexLegends
It really was.
First #Vinyl purchase of 2020 from #rediscovery in Ballarat (1st visit there!) is "Cry Like a Rainstorm, Howl Like the Wind" from Linda Ronstadt and Aaron Neville and featuring classics like "Don't Know Much" and "Goodbye My Friend" First time finding this one vinyl too! #LindaRonstadt #crylikearainstormhowllikethewind #AaronNeville #NowSpinning #vinylcollection #InstaVinyl
Been a very long time since I've bought a 'new' game for the #PS4 but I've had my eye on #CodeVein for some time and bit the bullet when I saw it on special at @ebgamesau! #PlayStation4 @playstationau @codevein
Its been some time since I've bought any #vinyl but here's my last purchase for 2019 and this decade! @gloriaestefan's #CutsBothWays from 1989 bought at @millmarkets Ballarat. #GloriaEstefan #VinylPurchse #NowSpinning
#MerryChristmas from my family to yours! #1983
My top 12 favorite/most listened to singles for 2019 in no particular order! @samanthajade #Bounce @troyesivan #LuckyStrike @tonesandi #DanceMonkey @chingizmustafayev #Truth @deanlewismusic #StayAwake @georgiauk #AboutWorkTheDancefloor @freyaridings #Castles @madonna #Medellin @manszelmerlow #Fuego @thisissigrid #MineRightNow @katyperry #NeverReallyOver @ingridmichaelson #MissingYou
It's Christmas soon yes? P.s I've over binged on chocolate covered pretzels and now I feel yuk!