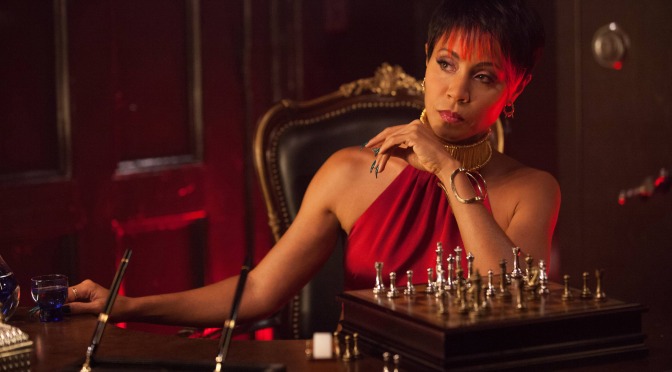 Batman prequel series, Gotham premiered last week in America to strong audience of over 8 million viewers, but how many will stick around in a Gotham that doesn’t have it’s Batman?

As it is with pretty much every re-telling of the Batman origin, Gotham starts off with a scene most familiar to fans of the DC comics hero – Martha and Thomas Wayne brutally gunned down in a dark alley by a man in a ski mask, sparing the life of a young Bruce Wayne.  It’s been done many times over though Gotham offers us  a slight twist on the traditional story with a young Selina Kyle, perched high on a ledge on the buildings above, to witness the tragic event.

One could be forgiven for thinking that following this start, the rest of the show will just go with motions, being utterly predictable and boring but thankfully, this is pretty much where the ‘what we know’ ends and we’re opened up to a new representation of Gotham, this time, living life before Batman.

The city itself in Gotham is dark and moody and filled with an assortment of unsavories, much like the Gotham seen in Tim Burton’s 1989 Batman film though thankfully, it’s not as kitschy. Those familiar with the world of Batman will delight in seeing nods to known characters including Selina Kyle/Catwoman (Camren Bicondova), Ivy/Poison Ivy (Clare Foley), Oswald Cobblepot/The Penguin (Robin Lord Taylor), Edward Nygma/The Riddler (Cory Michael Smith) and of course Bruce Wayne/Batman (David Mazouz)

A young James Gordon (Ben McKenzie), recently new to Gotham, is finding out the hard way that his idealistic views of crime and punishment are no where to be seen in a police force that’s filled with corruption. He’s taken to solve the Wayne murder with drunkard partner Harvey Bullock (Donal Logue) who happens to have connections to the underworld and local mob members who may have information that may help solve the murders.

As Gordon, Ben McKenzie starts off solidly with his woe-is-me eyes as he struggles to maintain his morality in a city that has none.  Logue’s Harvey Bullock is a weary and dreary detective, too caught up in the darkness that has enveloped Gotham.  Bicondova and Mazouz don’t really have much to do in the pilot – there’s some tears, some climbing, some ‘let’s feed stolen milk to some stray cats so you know i’m future Catwoman’ – it’s meager stuff – at the moment.

The ones to watch however is Jada Pinkett-Smith as Fish Mooney and Robin Lord Taylor as Oswald Cobblepot aka the future Penguin.  As power crazy night club owner Fish Mooney (Mooney is a character created for the show and not from the Batman world), Pinkett-Smith shines in pretty much every scene she’s in, chewing through lines and swinging baseball bats all whilst still maintaining perfect nails and harsh one liners.  While Gotham, it seems, is  trying to eke out the camp factor, Pinkett-Smith’s Mooney is the perfect playoff, possibly channeling a 60’s-Batman era Eartha Kitt.

Lord Taylor’s Oswald Cobblepot is just downright deranged.  The first moment you see him you can tell he’s got more than a few screws loose up top as he takes pleasure in being offered the chance to take a baseball bat to a thief.

Gotham is aiming high, hoping to lure in those new to the world whilst trying to keep dedicated Batman fans happy.  It doesn’t seem like an easy task..asking Batman fans to watch a show that’s about Batman but doesn’t star Batman…asking viewers to tune into another comic-come-TV-series…yet as a whole, Gotham actually works as a dark and slightly erratic drama about one man’s mission to rid his city of corruption and crime while peppering the scenery and story lines with weird and unusual characters.