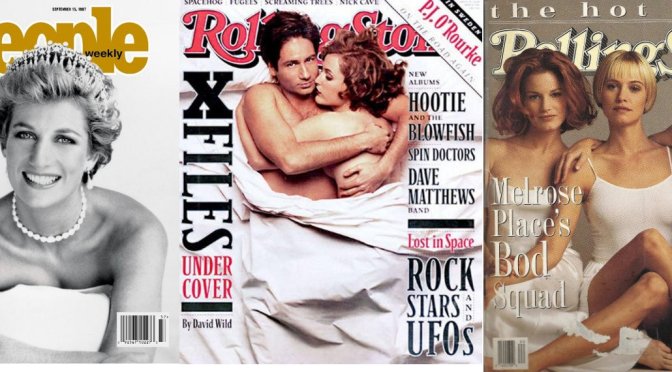 The magazine may be a slowly dwindling media format thanks to the internet and its ability to provide up-to-the-minute breaking news easily shared through various social media channels, but throwback to pre-world wide web, where prime time television shows like Friends and Melrose Place were bringing in 20 million viewers weekly and magazines were selling just as many copies of issues where exclusive interviews with A-listers would be accompanied by ‘that’ magazine cover photo.

Such uproar occurred from this photo of a 28 year old Demi Moore, naked and heavily pregnant on the cover of Vanity Fair’s August 1991 issue that some supermarket’s pulled it from shelves while others hid it, treating it like an issue of Playboy. The pose however would be later recreated by such stars as Natalie Portman, Britney Spears and Serena Williams

It was a mere twelves months later when Demi Moore returned to create another iconic cover for Vanity Fair, once again shot by Annie Leibovitz, once again naked, this time however, covered in a painted on three piece suit.

Cindy Crawford clad in a tight black swimsuit shaving a suited up K.D Lang who is happily nuzzled into the cleavage of the supermodel. In 1993, the controversy writes itself with the two women, photographed by Herb Ritz, causing a stir with the gender bending image of Lang who had recently come out as a Lesbian.

The Melrose Place ‘bod squad’ featuring Laura Leighton, Josie Bissett and Heather Locklear, all clad in night-times whites, tousled hair and alluring stares. The cover was hot but caused a stir when it was revealed the other two stars Daphne Zuniga and Courtney Thorne-Smith were hidden under a flap. This shoot and resulting cover was brought up in the Unofficial Melrose Place Story created by Lifetime that mentioned Leighton contacting her agent with her concern about her co-stars not making the cover.

HOT. HOT. HOT. No other words to describe this Rolling Stone magazine cover that sent a million X-Files nerds into boner frenzy. A topless Gillian Anderson offering some side-boob, draped over a topless David Duchovny, arms wrapped tightly around each other. The image played heavily on the public’s want of their on-screen alter ego’s FBI Agents Mulder and Scully to hook up.

Coming off the back of her number one hit “Hit Me Baby One More Time”, 17 year old Spears, wound up on the cover of Rolling Stone magazine wearing not much at all. The photos, shot by David LaChapelle caused outrage from the parents of her tween fans while In 2008, the singer’s mother, Lynne, explained how her daughter ended up posing for the controversial photos. “We were in shock at what was going on, and we were in awe. We didn’t have any choice in the pictures. We had no one that could tell us what we were supposed to be doing.”

42 million people in the USA alone watched Ellen’s alter-ego Ellen Morgan, come out as a lesbian. It was unheard of and the moment became an iconic one in television history. TIME’s magazine cover featuring Degeneres, herself, coming out as a lesbian proved too much for America in 97′ which eventually saw Ellen lose her show and become an unwanted talent in Hollywood.

Magazines were feeding into the public frenzy that was the untimely death of Princess Diana in 1997. Covers showing grainy paparazzi snaps of the crash scene or of Diana pre death were everywhere. People’s tribute issue featured a touching black and white photo of the peoples princess, smiling brightly, allowing us to remember the woman so loved by the public. The issue became the magazine’s highest selling issue (3.1 million) until the 2001 9/11 attacks.