Time to unite together clone club members as our ‘sestras’ are in for a tough ride for Orphan Black’s third season with several new threats emerging from the shadows.

Revealed during the show’s TCA (Television Critics Association) panel on Saturday in Pasadena, one major threat will come in the form of Rudy aka scarface – one of the male clones revealed during the final episode of season two.

That final scene saw Sarah (Tatiana Maslany) come face to face with the crazy project castor clone, which immediately continues on in season three with the two talking and us discovering just how unhinged Rudy actually is.  “He likes to get under people’s skin.   He will just pick at you until you blow up and he’s won.” says Ari Millen during the TCA panel.

Another new threat for the clones comes in the form of Topside (the organization that steers the DYAD group) agent or cleaner Ferdinand (James Frain) “He plays a really amazing, scary guy that’s come in from Topside,” EP John Fawcett said. “He’s a very dangerous threat to our girls.”

Things also get complicated for our favorite drinking mamma Alison when an ex-flame from high school comes to visit.  Played by Justin Chatwin, Alison’s ex, Jason Kellermen, is a savvy drug dealer who causes issues for Alison and husband Donnie.

Fawcett also let us all in on some news about Felix (Jordan Gavaris) for season three.  With the popularity between Felix and Alison played up during season two, we can expect Felix to connect with some of the other clones – namely Cosima who will be spending most of her time recovering in Felix’s apartment.

No word on what to expect with Helena, one eyed pro-clone Rachel, Mrs. S, Kira or any of the other side characters currently floating around the clone universe.

Orphan Black returns Saturday April 18th on BBC America in the US with airings expected to start shortly after on SBS 2 in Australia.

Well it’s almost here, The season four finale of The Walking Dead is just around the corner and it’s all about the mysterious Terminus.

Over the course of the second half of season 4, our band of survivors have seen scattered about the Georgia countryside, massive signs saying  “TERMINUS: All who arrive survive” and of course, with shelter and protection at an all time low, Terminus sounds like the hope they all have been searching for.

Last weeks episode saw Glenn, Maggie, Tara, Abraham, Rosita and Eugene all make safe entrance into Terminus, though the fact the entrance was unlocked and the refuge eerily empty leaves us to wonder just how safe Terminus is?

Fans were also quick to piece some possible puzzle pieces together involving Terminus and Mary (the first person they encountered within Terminus) and the house full of dead bodies Rick, Michonne and Carl stumbled across. 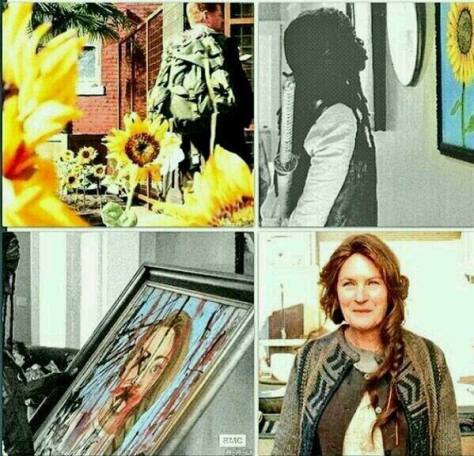 Is Mary the woman in the blood splattered painting?

In a series of clips aired on New Zealand TV, it’s been shown that Rick’s group (Michonne and Carl) also make it to Terminus, but it doesn’t take long for things take a turn for the worse..

So along with the possible Mary and that painting connection, there have been a few other and wildly popular theories that have been sprouting up as to what to expect for the finale.

Terminus is full of cannibals!:  In the comic series, Rick’s group come across a pack of cannibals called The Hunters and fans have been waiting for them to possibly appear and with Glenn’s group meeting Mary while she was cooking something on the BBQ, many are believing this is the Hunters compound.

Terminus is safe but attacked:  Another theory is that Terminus is safe, Mary is harmless and all is good….until Joe and his group (along with Darryl) arrive leaving some to think Darryl will have to make a choice between the two groups he has formed alliances with.

The Governor is still alive!: This one is a bit far fetched, considering we saw the guy obliterated with a bullet to the head, but some fans are saying that the Governor is alive and Terminus is his new Woodbury.

Either way, Danai Gurira (Michonne) says that all the theories she’s seen are wrong.  “I’ve read all predictions and none of them are right,” she told Digital Spy. “No one’s going to be able to figure out this ending – so it’s going to be a really exciting thing to watch people respond to!”

When BBC America’s Orphan Black returns on April 19th (for Aussies, season one airing on SBS2 – no date for season two yet), expect to see an extended cast roster as Sarah, Cosima and the other clones fight to save their lives and identities from the Neolutionists.

Actress Michelle Forbes (The Killing, True Blood) has signed on to appear in the sci-fi hit show’s second season and recently spoke with BBC about the role – although, keeping very tight lipped about what to expect.

When asked about her role as Dyad Agent Marion Bowles for the second season, Forbes says “Marion Bowles has lot invested in the clones. In their science. I’ll leave it at that.”  Forbes added that she hadn’t seen the show before being cast, but has since watched and adored and is in awe of lead Tatiana Maslanay’s performance of all the clones.

In addition to Forbe’s as Marion Bowles, Season 2 will introduce new characters to the clone world including Cal Morrison (played by Michiel Huisman) and Henry ‘Hank’ Johanssen (Peter Outerbridge) who is a modern day cowboy leading a gang that have broken off from the Prolethean brotherhood.

Orphan Black’s second season will kick straight into Sarah’s frantic search for her kidnapped daughter Kira while a season length story-line will see a power struggle between Rachel Duncan and Sarah (both played by Tatiana Maslany).

Also expect some tension to rise between Sarah and Felix (Jordan Gavaris) as Felix’s back story is delved into and we learn more about Sarah’s best friend and confidant.  Orphan Black creator Graeme Manson stated we will learn more about Sarah’s past while Alison will find herself consumed by bthe mystery surrounding Aysnleys (Natalia Lisinska) death and Cosima will find herself in a heart-breaking situation while battling a mystery illness.