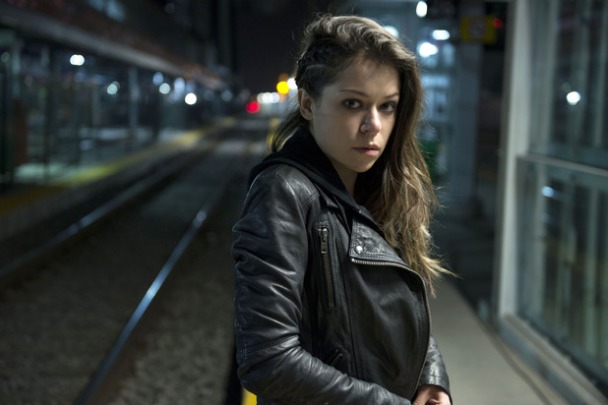 Card carrying members of the clone club can rejoice!  Orphan Black’s long awaited season 2 air date has finally been announced! Bad news is that we will have to wait until April 19th next year before catching with Sarah and her clones.

The news was revealed during BBC America’s screening of “Doctor Who’s” “The Day Of The Doctor” 50th anniversary special along with a very quick teaser trailer (which can be watched below!)

The official synopsis of season two states: Season 2 of the series hits the ground running with Sarah (Tatiana Maslany) in a desperate race to find her missing daughter Kira (Skyler Wexler, Carrie). Her scorched earth tactics spark a war with pro-clone, Rachel (Maslany), dividing and imperiling all the clones. As Sarah discovers more about her past, mysterious newcomers appear, but can they be trusted?

Back in September, it was revealed that production on season two had begun with lead Tatiana Maslany back along with Jordan Gavaris, Dylan Bruce and Maria Doyle Kennedy all returning for the new episodes.   “We’re truly amazed at the incredible response we received from TV critics and fans alike since the beginning of this series,” David Fortier and Ivan Schneeberg, executive producers and co-presidents at Temple Street Productions, said in a statement. “We’re delighted to have the opportunity with our supportive partners BBC America and Space to continue on this amazing journey and to answering some of the impending questions fans were left with from the end of last season.”

Orphan Black season 1 is set to air for the first time in Australia on SBS2 in early 2014.

Not bad for $11 if I do say so myself! #JumpForce #PS4 and #Overwatch #Symmetra mini figure for pennies after trade in!
Not gonna lie, this arriving today makes me very happy! Been a fan since 94' and this is just perfect! ✔✔👍💗 #Lauraleighton @lauraleightonforreal
Tell me what @playstationau games are you guys playing at the moment?! I tried Code Vein, loved the character customization but hated the game so I've resorted back to Overwatch and Apex Legends #PS4 #PlayStation4 @playstation #Gamer #Gaymer #Overwatch #ApexLegends
It really was.
First #Vinyl purchase of 2020 from #rediscovery in Ballarat (1st visit there!) is "Cry Like a Rainstorm, Howl Like the Wind" from Linda Ronstadt and Aaron Neville and featuring classics like "Don't Know Much" and "Goodbye My Friend" First time finding this one vinyl too! #LindaRonstadt #crylikearainstormhowllikethewind #AaronNeville #NowSpinning #vinylcollection #InstaVinyl
Been a very long time since I've bought a 'new' game for the #PS4 but I've had my eye on #CodeVein for some time and bit the bullet when I saw it on special at @ebgamesau! #PlayStation4 @playstationau @codevein
Its been some time since I've bought any #vinyl but here's my last purchase for 2019 and this decade! @gloriaestefan's #CutsBothWays from 1989 bought at @millmarkets Ballarat. #GloriaEstefan #VinylPurchse #NowSpinning
#MerryChristmas from my family to yours! #1983
My top 12 favorite/most listened to singles for 2019 in no particular order! @samanthajade #Bounce @troyesivan #LuckyStrike @tonesandi #DanceMonkey @chingizmustafayev #Truth @deanlewismusic #StayAwake @georgiauk #AboutWorkTheDancefloor @freyaridings #Castles @madonna #Medellin @manszelmerlow #Fuego @thisissigrid #MineRightNow @katyperry #NeverReallyOver @ingridmichaelson #MissingYou
It's Christmas soon yes? P.s I've over binged on chocolate covered pretzels and now I feel yuk!
Obsessed. 😍😍🍭🍬 #fini #FiniCandy #finifruitattack @fini_usa
A few purchases from @ebgamesau this afternoon. #@playstationau #tomclancy #thedivision2 #unchartedlostlegacy