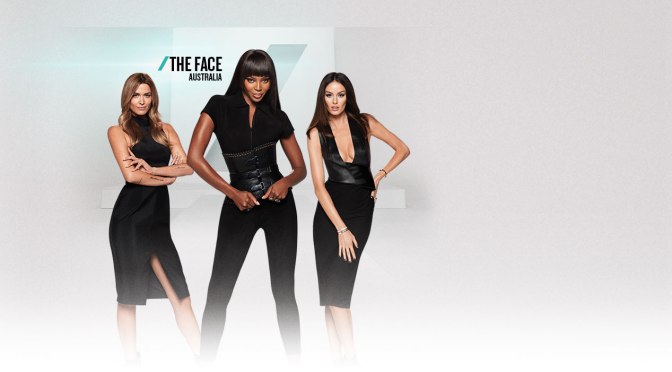 What happens when you mix Australia’s Next Top Model and The Voice?  You get The Face Australia, the newest reality competition hitting our screens Tuesday night.

Three judges/mentors, comprising of Naomi Campbell, Cheyenne Tozzi and Nicole Trunfio battle it out to fill their team of four wannabe models and mentor them through challenges and photo shoots with the hopes one of their girls will take out the top prize – becoming ‘The Face’ of Fresh Effects by Olay, walking away with a real contract as the brands ambassador.

Those coming into The Face Australia with the presumption of seeing a softer and calmer Naomi Campbell will be disappointed. The Supermodel with a penchant for throwing mobile phones is all bitch stares, killer heels and offering up a ‘win at all costs’ attitude. It’s no wonder the two models who worked with Naomi in the American version (Coco Rocha and Karolina Kurkova)  left before season two began.

Right from the outset, we’re presented with confident models and even more confident model mentors and it doesn’t take long before fireworks erupt between mentors Naomi Campbell and Nicole Trunfio resulting in the first of many (I’m sure) meltdowns – Campbell slams her folders down, calls Trunfio a f*!khead and then proceeds to storm off set.

This, however is not the best part.  The storm-off is quickly followed by Naomi unable to find her way off set…

There is a lot of tension between Campbell and Trunfio who clash regularly during the castings and the team selections (one could almost call the way Campbell is towards Trunfio a form of bullying) while Cheyenne Tozzi quietly sits beside, observing the impending car crash and looks gorgeous doing so.

The model cull (the original 24 models are cut down to a final 12) results in some rather painfully awkward silences, damaged egos and some clear front runners to take out the top prize.

Due to previous bad luck in choosing favourites for these types of shows (Never had my Number 1 win), I’m not going to be vocal about my top choice, but below are the four girls who would have made my team.

So how will The Face Australia work?  The models will compete in two challenges each week – The first being a test shoot workshop where they learn from their mentors and the second is a real-life shoot for a client including magazines and clothing brands.  Says mentor Cheyenne Tozzi “We’re there to train them personally. These jobs are real.”

Each week the mentor of the winning team will choose which girl in the bottom two gets eliminated, causing a world of pain and friction for the other mentors involved!

Yes, this is another reality show featuring models wanting to model, but in the end, this is The Naomi Campbell show, and she makes for great reality TV viewing!